Today, Feathered Quill reviewer Diane Lunsford is talking with Rachael Siddoway, author of An Impossible Wife: Why He Stayed: A True Story of Love, Marriage, and Mental Illness (The Impossible Series Book 2).

FQ: Thank you for the opportunity to discuss An Impossible Wife, the second book in your ‘Impossible’ series. You referenced in the Author’s Note it was the ‘hardest book I have written to date...’ I am assuming a big part of this is because of your father and asking him to share the turmoil - it had to have been an exceedingly awkward thing for you to write as much as it was for him to share. Are you able to elaborate on a particular time during the writing process where it stalled, and you (possibly) questioned whether to continue? What did you do to overcome and continue?

SIDDOWAY: There were several times during interviewing my dad I questioned if he would be too uncomfortable to share his experiences. I was asking for details no father would want their daughter to know. Things like what made you want a divorce, tell me your most difficult moments being married, and describe the moment you lost the ability to raise your son because of choices your wife made. Because of my mom's suicide attempt my dad had to send his son to live with family out of state. I was surprised that even so many years later, his emotions were as raw and painful as the day the event happened.

FQ: How did your father receive your notion to author this book when first presented?

SIDDOWAY: When the idea to have a book written about his experience being married to a bipolar person was first presented he was hesitant. Because the book is written so honestly, he worried that readers would judge him. Either for how late he was in getting her psychiatric help, or how they fought, or that he almost divorced her.

FQ: Is there a place in Mitch’s being where he may never completely trust Sonja again regardless of how much he loves her? If so, how does he cope with this? If not, how did he overcome the fear of not trusting?

SIDDOWAY: Mitch loves his wife and trusts her with his children and his heart, but not his credit card. She's spent so much money behind his back I don't think their finances will ever be something he can fully trust her with again. But because Sonja is so willing to accept her weaknesses and set boundaries, like not owning a credit card, or not having her name on the house or car, Mitch has been able to have peace of mind.

FQ: When was the first time Mitch recognized something was terribly wrong with Sonja’s erratic moments and how painful was that moment of reckoning for him?

SIDDOWAY: The first time Mitch recognized something was wrong with Sonja was a few years into marriage. She had a meltdown in the middle of making cinnamon rolls. As she frantically kneaded the dough she burst into tears and ran her fingers through her hair. She sobbed and aggressively rubbed her face with dough covered fingers. He said as he watched her bake in such an unsettled state he thought, she's mentally unstable.

FQ: When you and your brother were traveling abroad on your respective missions, how often would you call home and how worried were you about what was really going on? Did you have a sense your father was sheltering you from how grave the situation was?

SIDDOWAY: While in Germany I only received emails from my parents. Towards the end of my time there my mother had attempted suicide and I had no idea. Both my parents did a seamless job at hiding the realities of their life. Perhaps all their practice hiding my mothers mental illness from people made them experts at covering their tracks. The emails I received from my dad were funny stories about my mom and her small dog Nutmeg, I had no reason to question that anything was off. Which is why when I arrived but home and was greeted with the news that my mother had attempted suicide, my youngest brother was living with an uncle, and my father was considering divorce, I felt simple truths like gravity had lied to me. Leaving me to hang in a state of otherworldliness, alien in my new reality.

FQ: There are two distinct and different perspectives between book 1 (An Impossible Life) and this book (An Impossible Wife). I understand why, but how did you decide on which story to write first?

SIDDOWAY: Because the mind of a bipolar person can be hard to understand, having An Impossible Life be the reader's first introduction to our family was crucial. An Impossible Life details the journey of what it's like to live in a Bipolar person's mind. Why they make the choices they make and what struggles interrupt can interrupt their day. I wrote that book in the first person as my mother which makes the story feel very personal and vulnerable. Once readers can sympathize with Sonja and find parts of her loveable the rest of the series feels much less accusatory. An Impossible Wife is my fathers perspective and because my tone carries a feminine tone and my father's difficulty sharing vulnerable feelings it wouldn't have been as strong to write his in first person.

FQ: In line with my previous question, how did you present the concepts to your parents (i.e., how did your mother embrace the notion initially as well as how did your father receive it)?

SIDDOWAY: My mother wanted to have her life story written down for years. She actually approached me and asked if I would write it for her. Her multiple mental illnesses had been such an ugly part of her life that once she found a way to live alongside her Bipolar disorder in a healthy way, she was ready for something beautiful to come out of them. The overwhelming feedback we received after releasing the book is what gave us the idea to make it a series. So many readers were wanting to know how the other family members were thriving that we decided to share those journeys as well.

FQ: The chapter on ‘Losing Lincoln’ had me in tears. I do not want to present a spoiler alert, but how is Lincoln today?

SIDDOWAY: He is currently at BYU in the Entrepreneur program and happily engaged to his best friend. Lincoln spent the holidays with us and everyone had a wonderful time together. His relationship with my mom is better than it's ever been.

FQ: If there is such a thing as the most notable ‘takeaway’ when it comes to understanding the complexities of bipolar disorder, what would be the most prevalent understanding you would want to share?

SIDDOWAY: That it is not a personality flaw. Bipolar disorder is an illness like cancer or diabetes. People don't ask to have it, and it can take their life, but through therapy and medicine it can also be managed. People with Bipolar disorder can have a happy functioning life with quality family relationships.

FQ: I read the sneak preview of the next book in your series and laughed at the blatant truth your mother gave you when discussing the reality (or lack thereof) of Santa. Hindsight is a wonderful coping mechanism. Is there a particular moment growing up when your mom imparted a harsh truth that helped you through a tough time? If so, would you please share?

SIDDOWAY: I'd say puberty is awkward and tough for most everyone. Ever since I can remember my mom has openly shared the details of puberty with my brothers and me. She said getting a period, having wet dreams, or a sex drive happens to millions of people in the world so we shouldn't feel special when our turn comes. She was so direct about normally awkward topics that when the time did come for me to go through puberty I felt like a normal functioning human being instead of some sort of mutant. 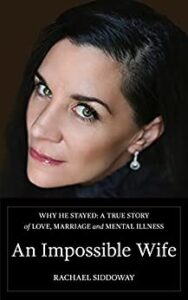