FQ: What is the significance of the menacing statue on the cover of The Moving Blade?

PRONKO: Menacing and protective, that’s Fudo Myo-o. The god has many meanings, but the name translates as something like “unmoving, shining king.” He is a guardian deity, with a sword of wisdom to cut through ignorance and a lariat to tie up demons. Encountering a huge statue of him in a dark temple can really jolt you out of the everyday and spellbind you. The deity has many variations stretching back to China and India, but in Japan, he is often thought of as one of the gods that protects Tokyo, and old Edo. There is a series of temples devoted to him in Tokyo. To me, he encapsulates the lurking violence, good and bad, in human experience.

FQ: How has your writing improved or changed since your last book, The Last Train?

PRONKO: I think it’s more the process of writing has improved. That’s what I focus on. For example, I upped the rewriting. With each rewrite, I focused on one particular point, character, connection, suspense. That’s not just fiddling with the words, it’s rewriting by rethinking, reworking, reconceiving, reconnecting. Because I wanted to tell a slightly different kind of story this time, I had to create not just one character’s background, but an entire range of back stories flowing through the history of American and Japanese relations. Spending time on that, I think, helped tell a stronger story.

FQ: Did you complete any research while writing this novel? And if so, what was the most critical thing you learned from this research?

PRONKO: I read a lot of history about the United States and Japan since World War II. While working at The Japan Times for years, I had seen most of the contemporary issues in recent years. It’s a relationship with a lot of subtle entanglements and unresolved issues. But those are hard to distill and squeeze into a novel. In this age of facile politicizing, it’s also easy to indulge in snap judgements and knee-jerk analysis. And I confess I sometimes, often, do that on my own time, but in a novel, that doesn’t get you too far. It feels go to let loose, but it’s not interesting to read. A novel is more about how people live with the conditions and situations that surround them. That is interesting. So, I guess I learned to cut out all the research and personal opinions by the final draft.

FQ: I read that some famous authors have writing rituals like fellow mystery/thriller writer, Dan Brown, who supposedly hangs upside down using anti-gravity boots to help him relax. Do you have any specific habits or rituals when you are writing?

PRONKO: Writing is already like hanging upside down—reversing, upsetting, pumping too much blood to the head. Nothing more like that for me, thanks. I do write, or usually rewrite, on the Tokyo train. When I can get an elbow free. Something about the motion lets me think freely. And Tokyo trains are filled with people reading, which I take as encouragement. If I get a seat, which is rare, I rewrite on printouts of the last chapter. If not, and there’s room, I write standing. If it’s too jammed for that, I’ll just think through a plot point, then scrawl it down or put it on a voice recorder once I get off the train. Other than that, the basic ritual is butt in chair in morning.

FQ: If the Detective Hiroshi mysteries were to become a movie, what actor do you envision playing the detective?

PRONKO: I like the actors from 1950s films, Toshiro Mifune, Takashi Shimura, Ken Takakura, Tatsuya Nakadai, but that’s just a dream list now, sadly. Some current actors like Hidetoshi Nishijima, Yosuke Eguchi, and Hideaki Ito are compelling, and have done similar roles. Koji Yakusho is always great. Shinichi Tsutsumi would fit Detective Hiroshi perfectly. I’m not sure how well known those actors are outside Japan, but they should be.

FQ: I noticed that in both books of this series your victims are American men. Is this done purposefully, or is it a mere coincidence?

PRONKO: Is that me killing off my American side? Some latent self-pity, or secret suicidal impulse? Hmm, I wonder. But, maybe not. I sketched out several novels for this series, so these two just happened to be the first ones that came together concretely. There were Japanese killed in those novels, too. In the next novel, there are no Americans at all, and in the one after that, the killer is American and the victim Japanese. So, half-coincidence, maybe?

FQ: One of the subjects mentioned in The Moving Blade refers to the SOFA agreement between the US and Japan. Do you believe that the US will ever fully remove its military presence in Japan?

PRONKO: I doubt the US will ever fully remove its military presence from the world! For one thing, decommissioning 800 bases in 70 countries would take a lot of logistics and a lot of budget. It might happen that the US scales down or consolidates some of the bases, but the military presence in all these countries will continue for the near future. The arguments for and against the US presence in Japan are very complex. But, at least, it’s important that Americans and Japanese know and think about where their tax dollars are being spent. Whatever one’s opinion, it’s important that the American military presence not be downplayed, concealed or ignored.

FQ: Now that you have two great mystery novels under your belt, what advice would you give new authors who are considering writing in this genre?

PRONKO: Genre can be demanding, even tyrannical. People like to know what they’re getting ahead of time, and genre helps with that, but delivering too much of what people “like” is not always good. I think of genre as a recipe. Whenever I use a recipe, though, my kitchen never has all the right ingredients, and after a glass of wine, or two, I ease away from preparation techniques and start improvising. If the food comes out right, that’s all that matters. The nice thing about a novel, compared to dinner, is that if it’s not right, you can redo it or throw it out. I like the mystery genre because so much variation is possible. Almost anything could, conceivably, fit inside. That’s a lot of room to work, so new authors, and old ones too, should work with that room. So, the tightness of the genre should be respected and the looseness explored.

FQ: In our last interview you mentioned this current book, and another book in The Detective Hiroshi series. Will the series definitely end with the trilogy, or have your writing plans changed?

PRONKO: It won’t end at three. The next one, Tokyo Traffic, is now being rewritten. That will be followed by two more in this series, which are sketched in already. I want to do a standalone with Sakaguchi, the ex-sumo wrestler, and a prequel with Takamatsu. After that, I have a few other books in mind, though, too. And I’d like to get back to writing some essays about Tokyo again, too.

FQ: After finishing this second novel in the series, I have a few unanswered questions, and am curious to learn more about Detective Hiroshi Shimizu. Can readers look forward to learning more personal details about the detective in your next novel?

PRONKO: In the next one, Hiroshi has moved in with his long-lost girlfriend and much comes out about his inner world and about his past. I don’t want to let out everything about him too soon, but as he opens up to her, we learn more about him! So yes, more to come, a few more questions answered, a few more posed, about Hiroshi, Tokyo and the constant undertow of crime. 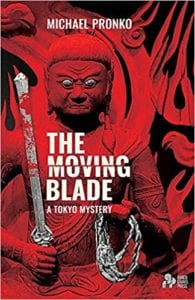