FQ: Have you personally experienced any supernatural phenomena? If so, what happened?

ASPEN: I have personally experienced ghost interactions - like when my grandfather passed...the night before he passed he sat on the edge of my bed and talked to me and told me stories as if everything was perfectly normal and then he told me he was leaving and to take care of the family...the next morning when I woke up my family said ‘your mother had a tough night’ and I answered “oh I know Grandpa told me he was leaving” and I carried on like it was business as usual. The family members did not really like this response, but it was the truth of the matter. There was no other way to explain the things I knew and the things I had been told.

FQ: When you first conceived the story, were you planning for it to be a series, or did so many ideas start coming while writing that your vision expanded to “the continuing adventures” of the team?

ASPEN: When I first thought about this series, it was one gigantic brain dump onto paper. I thought “oh my goodness this is waaaay too long for a book” and then the idea of splitting it up and having a series just made good sense.

FQ: Did any particular novels or films inspire you to write Praesidium?

ASPEN: I have been inspired by all sorts of writing across many different genres - nothing in particular.

FQ: How about reality: Are any of the characters inspired by yourself or people you know?

ASPEN: Yes some of the characters have ’nods’ to people I have met throughout my lifetime

FQ: Your author bio mentions a family dog. What breed is he/she, and what’s his/her personality like?

ASPEN: Otis, the family puppy, is a rescue dog and he is a mixture - he has beautiful curly hair and is dark red, but he doesn’t shed. He is very sweet, and he turns 2 in September 2022!

FQ: What’s your process for structuring a story? Are you a plotter or a pantser, or something in between?

ASPEN: I am something in between and it depends what I am writing. For the spy novel I am currently working on, its more planning and pacing...it just depends.

FQ: The Praesidium of the title is not identified in the story. Will it be revealed later in the series, or are readers expected to figure out its meaning?

ASPEN: Praesidium means Protection - and while the word itself is not used in book one, it is intentional because in book two the reader learns more about the organization and the Latin names of the books...however, protection is highlighted as part of the job that the Raphael and his team bring to the world.

The next book in the series is Cogitatio (pronounced co-gee-ta-tee-oh) and it means REFLECTION. In book two Raphael begins the book using this word and explaining it.

FQ: Tell us something about the next volume. Is it in progress or complete? Will the same characters be featured, or will the cast change?

ASPEN: Book Two is in editing right now — the team members have grown, and there are a few new folks added along the way. A majority of book two deals with the idea of imprisonment, both individually (like a prison in your mind) and socially (like incarceration) and focuses again on highlighting hope...

Book Three is in draft...and Book Three reveals a lot of the backstory! 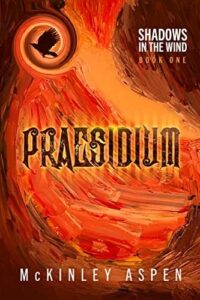