FQ: There are many fantasy series out there, but very rarely can a reader stumble upon something this satisfying on all levels. What brought about the idea for the Drifters’ Road collection?

McCURRY: That is a good question. I daresay that I cannot quite give an exact day where I decided that I was going to write stories, nor can I say that I originally intended on being an author one day. Throughout the years, I had always liked stories, particularly those of fantasy like The Lord of the Rings, Star Wars, and other tales of the sort. From there, I would say that a story idea came to me at one point. I then kept on building on it, and then the next thing I knew, I was planning out books, drawing maps, and coming up with character names. Then I was outlining chapters and writing them. And now, here I am writing books.

FQ: The characters are so well-written and so colorful, are they actually based on real people in your life?

FQ: You pen fantasy so well; did you begin writing in this arena at an early age? In addition, is there another genre you wish to dive into one day that you haven’t tried as of yet?

McCURRY: I actually did not begin writing stories until I was adult. When I was younger, I never even considered the idea of being an author and telling stories. It was when I became older that I began to even entertain the thought of writing any books. But as I said earlier, an idea came to me at some point, and then I was planning out books, chapters, maps, and all other things needed in my stories. And the next thing I know, here I am as an author! I suppose that one might not wake up one day and decide that they are going to publish books, or at least I did not. Instead, it was a steady progression to that point, where one thing led to another.

As for what other genres I would be interested in, well, that is an interesting question. To start, I am not sure that I would want to write anything that has our modern day as the setting. I prefer fiction, and the kind where the reader is taken someplace else other than the real world that we are currently in. Well, science fiction is fun, and I do like the idea of exploring the depths of space. Steampunk is one kind of genre that I did not quite know about, but it looks like one that could be fun. I also like pirates and the idea of venturing out to find treasure. Tales where the main character is a mouse, a rabbit, a bear, or some other kind of wild animal, also looks like fun. A lot of possibilities!

FQ: Do you have specific mentors or writers you’re a fan of? If you had to provide a piece of advice to debut authors out there, what would that be?

McCURRY: Tolkien is undoubtedly the greatest of my influences. He was nothing short of a masterful storyteller, and might be the greatest storyteller to ever write. The Drifters’ Road as a series has several similar creatures that Tolkien borrowed from old folklore, from goblins, to trolls, dwarves and elves, and so on. As my tale goes on, however, it will have other creatures from folklore that were not in Tolkien’s. Particularly in The Hobbit, Tolkien was quite clever, much like many fairy tales were, which I try to emulate. Perhaps most importantly though, the themes of Tolkien’s works have a great influence, the timeless themes of courage, selflessness, friendship, good and evil, and so forth. These sorts of themes are what I think ultimately make a great story, and are what ultimately inspire a reader, and those are what I hope to capture within The Drifters’ Road as the tale goes on.

Among other influences, I daresay that nearly everything that I read is at least a hundred years old, if not over a thousand years old! Hans Christian Andersen has had some influence, as well as some old European mythologies and fairy tales. George MacDonald is another author that I have become quite a fan of, though I daresay that I did not discover him until after becoming a published author myself. However, I began to read some of George MacDonald’s work, particularly The Princess and the Goblin, and right away I noted that his narrative style was very similar to mine! So needless to say, I took a liking to him immediately.

As for what I would say to new authors out there, I am a little hesitant, because I am still learning what I am doing myself. If anything, I would advise patience. It takes time to build an audience, and it takes time to publish multiple books as well as figure out where and how to market them. Be very patient, and do not give up immediately.

FQ: Did the pandemic alter your writing or your daily work in any way? Along those same lines, is writing your passion or do you work in another industry as well?

McCURRY: I would not say that it did at all. If anything, I suppose that being out of work, as many people were for a good period, there was a lot of extra time to work on stories, which I tried to make good use of. Beyond that, however, I do not think the virus had a great effect.

As to the second question, well, I would have to call my work on stories a hobby. If it becomes something significantly profitable, then certainly that would be great, but most authors do not reach such a point, and so I say that such work at first must be done as a hobby, outside of having a day job. In terms of a day job, I would say that I prefer technical or handy work as opposed to sitting in an office and working at a computer all day. When at home and working on my ‘hobby,’ I am sitting at my computer quite a bit as is! Having some kind of work that requires a little exercise I think helps to balance things out.

FQ: What would you say would be the first comment your characters would make about 2021? Is there enough bravery/courage in this present world to perhaps usurp evil once and for all?

McCURRY: Well, my intent is to keep my story separate from problems of the real world, and to keep any political or social commentaries out of it. Perhaps the reader can apply a thing or two from my story to the real world, but a storyteller actively telling the reader what they should think is something I do not believe in. I do have my own opinions on what takes place in the real world, but as someone trying to sell some books, I do not think it a good idea to give one’s political opinions, as I do not believe it would be good business to possibly cut one’s potential audience in half. And so, I think I had better refrain from this particular question. I intend to keep my opinions on political and social issues a secret, at least for as long as I can.

FQ: What would you tell readers is at the core of this series, message-wise?

McCURRY: I would say that I try to avoid putting messages into my stories. My belief is that we turn to stories as a pastime, or for enjoyment, or better yet, to temporarily escape from the real world. If I were to place messages into my stories, particularly allegories of a more social or political nature, it would diminish the escapism that we look for in stories in the first place. I try to keep my stories as just that, fun and entertaining stories that hopefully readers would enjoy.

Now with that said, there are some Christian themes within the story, particularly about losing faith in a greater power and regaining it. I would not say though that I set out intending to have this sort of theme within my story. Instead, as the story idea grew, it began to make greater sense for such themes to be in the story. I made a creator, named Enilundar, who is the god of the world in which Adroegen and his friends live. This creator, as well as his servants, were put in to add a level of myth to the world. But then I thought that with Adroegen, given that he had lost all in his family one by one, sometimes in the most horrific of ways possible, it only made sense that he would not feel that a greater power watches over him. And from that logic, I felt that there would be a greater payoff when Adroegen finds out that there is a great path in place for him, though I best not be more specific here, lest I give away what happens in my story! But it was from that in which the story gained such religious themes of faith in greater powers.

FQ: Are you currently working on Part Three? If so, can you give a sneak peek to readers about what’s coming from your creative mind in the future? (Please? LOL)

McCURRY: I best not say too much, but I can tell you that as of right now, I have a full draft written for the third book. As for what happens, I will say that the fight against Vyroun has concluded. The third book will feature the same six main characters as before, but they will go on another adventure. The map is going to grow, and the company will be traveling to places that even Adroegen has not ventured to before. They will meet new people and creatures along the way, and they will also find a new enemy to face. This new enemy will be an embodiment of evil much like Vyroun was, but in a different way.

And that is probably about all I should say for right now. There is still much work to do, but I have been working on book three. Realistically, I think it is at least a year away from being available. I very much look forward to when that day comes though. Thank you for this interview and I look forward to sending the next chapter of The Drifters’ Road to Feathered Quill when ready. 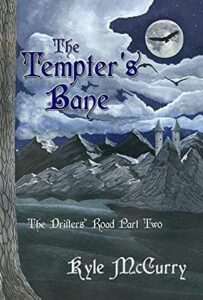