Today, Feathered Quill reviewer Lynette Latzko is talking with Kirsten Hegberg Pursell, author of On Becoming Me: Memoir of an 80's Teenager.

FQ: There are a few times when reading your memoir that I really wanted to yell out to the young Kirsten different things including the fact that life will change over time. If you could have a conversation with yourself during that time, what would you tell her?

PURSELL: I often found myself wanting to yell at her while I was writing the book! I don’t think it matters what I would have told her; she would have done what she wanted anyway. Wisdom is lost on youth. Ultimately, I would have said stay true to yourself and your convictions. Growing up isn’t supposed to be easy. It’s how we get to figure out what we’re supposed to be in all its many forms.

FQ: What are some of the things that you have learned since completing On Becoming Me?

PURSELL: I have learned that not everyone wants to remember those years, which is interesting because mine were not great, but they were necessary. My brother and I had that conversation. He was the popular kid. So, the opposite of me. But when we talked about the book, he said he felt a lot of the same things I did. I had no idea!

Other people have said I’m brave to put it out there. I don’t think of it as brave. I think it’s just real. And we need reminders about real people who struggle for whatever reason but come out okay on the other end. Famous people tell their stories, but stories like mine are about normal, everyday people. We all have struggles! I love when people tell me they take their time reading the book because they’re reflecting and remembering, too. It’s cathartic for them as well.

FQ: Have any of your children read this book or any of your journals, and if so, what did they think about it?

PURSELL: Both my daughters have started the book. They’re both in college, which made extracurricular reading a little tough. My youngest daughter has appreciated some of my insights, even quoting me when I said that “College is about the experience, not the education.” I think they have an interest in finishing it. It’d make them appreciate even more why I am the ultra-cool mom that I am! And they might just figure out that I do understand a lot more than they think I do.

FQ: After many years you stopped writing in your diaries. Did you ever restart them?

PURSELL: That was the craziest revelation for me. I was so prolific. When I opened the last of the journals, I was crushed that I didn’t write more. I honestly think I had finally gotten to a really good place and didn’t need them as a crutch anymore. Off and on over the years I have taken to my computer and journaled. Feels so different than the pen and paper nostalgia of my diaries.

FQ: What is it about your memoir that makes it unique and stands out among the many other memoirs available?

PURSELL: First and foremost, the voice! Other than Go Ask Alice, I couldn’t find any other memoirs like mine that truly open up and give you that raw inside look at how a teenage brain thinks while they’re thinking it – not as I remembered it (they would have been so different!). I was all over the place, which I think is so normal. It’s confusing growing up. So many messages. I can’t even imagine what the inside of a teenage brain looks like today! I had some unique experiences as an athlete. I struggled with self-acceptance and suicidal thoughts. I crushed on celebrities. I ran the gamut of emotions. I also was really fortunate to get to experience a foreign culture and that was a huge influence growing up. Music and movies were huge for me then, too. Lots of ‘80s cultural references, a friendship journal, letters, and poetry all meshed together to tell the story.

FQ: As someone who has also spent years off and on handwriting in journals, I understand the value of not only writing in journals but also keeping them for the future. How would you encourage the current generation to unplug from their digital worlds, and write in a journal?

PURSELL: I love this question. I was on a beach in Hawaii last summer and I saw a girl writing in one. I started talking to her and told her about my book. We became “friends,” and she has read my book. She wrote for the same reason I’d encourage handwritten journals: it allows you the freedom to write your thoughts anytime, anywhere. Not worrying about backspacing or missing letters is such a beautiful part of journals. Plus, if you put them away for years like I did, they don’t get lost on your computer. They serve as one amazing reminder in book form of that time of your life.

FQ: Do you think writing in a digital journal could be just as effective as the “old-fashioned” way of writing by hand?

PURSELL: I think any kind of journaling is great. But holding that book in your hand, sneaking off to write, and feeling your words is special to the old-fashioned way. I could see how my tear stains smudged the ink on many pages. That was powerful.

FQ: You referred to several songs and movies from the 80s throughout your journals. What were your favorites?

PURSELL: There is no better decade than the ‘80s. John Hughes was a God. The Breakfast Club is still one of the greatest movies made on not judging books by their covers. I loved alternative rock. Depeche Mode seriously had a song for every mood. But the songs that could make me dance were the greatest. My all-time favorites of that decade are I’ll Stop the World and Melt with You by Modern English.

FQ: I noticed that you’ve also published two fiction novels, Harvard and Company Clown. Do you have any future writing plans in the works?

PURSELL: I am currently writing my fourth book called Long Enough to Love You. In ways, I consider it a fictitious sequel to my memoir. It’s a coming-of-middle-age story about second chances in life and love. It challenges many of life’s assumptions. I am loving writing it and sometimes feel I can’t finish it fast enough because I know the story will resonate with so many readers. 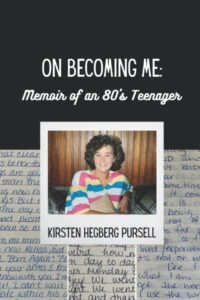