FQ: Since this is your second book in a trilogy, how has your writing style changed, and how has it remained the same since writing the first book?

THYE: This second book in the series is quite different from the first. Here I get to explore business, sex and intrigue/violence that was not apparent in the first of the trilogy. This allowed me to expand the dialogue that accompanies these themes.

The writing style is the same in that character development is paramount in both books. Many of the same “players” are in book one but are expanded upon. Rusty’s adversary, Boomer, continues his animosity and it becomes a driving force in the plot.

FQ: Do you have any future writing plans once you complete the last book in this trilogy?

THYE: Yes, although I’m in no hurry. Rusty and Ron and Cindi and Zeke is the story of three fourteen year-olds (and their dog Zeke) that, one moonlit night, notice two couples skinny-dipping in the lake. The next day a naked woman is found floating near the raft they were using. It’s a mystery the kids may help solve.

FQ: Now that you’re a seasoned author, do you have any writing advice to give to aspiring authors?

THYE: Write about what you know. Writing a best seller is tough to come by so don’t get obsessed with this idea. Write for the pleasure it brings you.

FQ: The covers of both of your books have a unique and interesting look, almost as if the picture is a negative image. Can you elaborate on the design?

THYE: I told my graphic artist that I wanted pencil drawings of photos I provided. She figured this out somehow and wouldn’t divulge her secret! I firmly believe that a book cover should depict a major element of the story - the major theme or a turning point.

FQ: Has Rusty’s character changed or evolved from when you originally envisioned his story?

THYE: Oh yes. At the end of book one he finds relative happiness and in book two I felt he needed to continue this process. At 37 years of age he learns about business that, as a writer, he had never been involved in. He also learns what true love means. Odd circumstances continue to plague him but they are more important now. He slowly evolves into the person he always wanted to be.

FQ: Why did you decide to make the life of Rusty Kenneficke into a trilogy?

THYE: Originally I just wanted to cover his ridiculous misadventures in one book. When I completed the book I felt his life was incomplete and I wanted to figure out the rest of his story.

FQ: Since most of your life and career wasn’t in the writing and publishing field, what were some of the things that surprised you the most when you decided to write and publish your stories?

THYE: My writing career started with Moto Raid about my 1963 motorcycle trip to South America. I wrote the book in 1990. It got good reviews and was successful enough to re-publish. That inspired me to continue on. The second travel adventure book, about basically that same trip fifty years later, was also well received. I wanted to continue writing and had always thought about putting some episodes of my life on paper; hence, The Misadventures of Rusty Kenneficke, the first book of the series. I was surprised at how much fun I had writing a novel. Using my imagination to come up with plots and characters has been a delight.

FQ: You expanded this story to include the background life of another character, Boomer, who has quite a wild, deviant past. Have you ever considered continuing to expand upon his character, and writing a spinoff novel?

THYE: No, not with Boomer. But in the back of my mind, swimming around looking for context, is a character that is deviant, although not violent. He’s a few years out, but formulating. 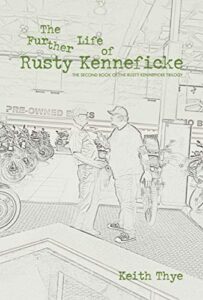