FQ: When you came to the end of this long trek, typing that last word, what feelings did you experience? How difficult is it for an author who has expressed so much emotion and told such a great tale to have it come to an end?

HARDY: To be honest Amy, I felt a sense of relief. My wife is rather ill and I am her sole caretaker (14 plus years plus), and while I was writing this trilogy her cardiac output became catastrophically low. In fact, I didn't write  a single word in the trilogy for two years-it took that long for her heart to recover, but she has other medical problems that must be constantly addressed.  But my sense of relief, was in knowing I finally finished what I needed to say to the public what Vietnam veterans are really like; they are not the baby killers the liberal media and the cowardly left leaning draft dodgers make them out to be. I tried to make the main characters as similar as I could to the men and women who served there. For Vietnam era veterans, this tale will never come to an end. Their battle scars, plus the emotional trauma inflicted upon them by the antiwar demonstrators will forever remain a haunting part of their lives and memories.

FQ: When Vietnam War soldiers returned home and were treated, for lack of a better term, unadmirably, that must have felt horrible. What was it like for some, perhaps even yourself, to have to deal with that?

HARDY: It was traumatic, Amy. I met vets who would not tell anyone that they served in Vietnam-even though they were very proud of their service. I met one army veteran in the gym who said he was relieved when he found out who I was. He had been maligned so many times in the aftermath of his service that thereafter he only discussed his military association with his family and friends. They even targeted American service women, the Angels of Mercy, who cared for the wounded in the hospitals and aid stations.

FQ: It is obvious you would be comfortable in the telling of war stories, certainly considering the amazing service you’ve done for this country as a Marine. But, if you wanted to “reach” into another area, can you visualize a type of plotline that you feel would be fun to tackle? If so, what field would your next hero be working in?

HARDY: Thank you for asking me this question, Amy! My last published novel was titled The Day God Played Baseball. It is for kids and adults who love the game-in fact even God loves the game so much that he decides to play on a downtrodden team called the Cherokees, as pitcher. But there is evil lurking here, and as you know, God doesn't like liars and cheaters. I tried to make it funny to satirize  the buffoons I met in real life, who acted somewhat like that who sponsored the Creeks, the team playing against the Cherokees for the league championship. During the game, strange things happen to the cheating players and their coach that cannot be explained by physics or gravity or good old common sense!

FQ: As per this review, do you have your own personal favorite literary characters that will always be a part of your mind? Any that, perhaps, changed your life or boosted your desire to write?

HARDY: You know Amy, I cannot think of one literary character (male or female) who will always be a part of my mind or encouraged me to write. I attribute this to the fact that although we were poor, I had a great mother and father and uncles that were also great role models. They all taught me to be independent and self-reliant; therefore,  I don't need any heroes in my life, although my classmates and my teacher in eighth grade loved my compositions and encouraged me to continue to write. I don't meant to sound arrogant, Amy, but I have been standing on my own feet for so long that in times of trouble the only hero I need in my life is God.

FQ: If so, who would be one character in fiction that you would love to meet or learn more about?

HARDY: Well Amy, John Wayne wasn't  fictional, but the characters he portrayed were; the roles of a men who were strong and self-sufficient; who didn't take any crap from those who tried to cheat or belittle them;  characters who loved and served their country and their families, and was brave enough to defend the weak and oppressed, and yet man enough to stoop and help a child.

FQ: This incredible trilogy has TV and/or movie screen written all over it. Tell me: Who are the stars best suited to be Cathy, Norm and Dion?

HARDY: Amy I am sorry, but as I look around Hollywood today all I can see or hear are liberal actors who support illegal alien immigration, who belittle our country, and denigrate our president and first lady. Gone are the Jimmy Stewarts, the Clark Gables, and the likes of Peter Falk etc. etc. etc. of yesteryear, when Hollywood men were really men. Don't get me wrong, there are a number of stars that have served this great country-but they're not speaking out. If I was ever so lucky to have my book on the big screen, I would like to see someone new given a chance. Someone who loves our country, supports our president and our constitution, and recognizes that we are a country of laws and boundaries The men and women in our armed forces deserve someone who represents them to be of the same high caliber as those who gave so much.

FQ: The scenes are so real in your stories: Is the POW material, in particular, something that came about from real facts and stories you perhaps heard over the years? If so, does it help to place these scenes on paper, and open some eyes in regards to what the men and women of the world who fight for the rest of us are/were up against?

HARDY: Yes Amy, the treatment of American POWs in Hoa Lo (the Hanoi Hilton) is as depicted in the story. It is based on meticulous research, the internet, and accounts of former POWs. I would recommend reading Commander Richard Coffee's book When Hell Was In Session.  I have discovered over the years that most people in this country don't want to hear the truth about real life horror stories. Even the documentaries on TV do not mention the torture endured by American POWs, and the North Vietnamese government tends to gloss over what happened in their prisons all over North Vietnam and not just at Hoa Lo. I believe that at last count about 2300 American POW are unaccounted for, and presume to have been murdered by the North Vietnamese. Thanks to heroes like Colonel Bud Day, who had his men memorize the names of fellow prisoners, we know what happened to some of them. We American have to understand that Asian countries' laws and customs are not based on Christian-Judeo principles, and they treat people and play to win by any means possible, which is reminiscent of the Nazi concentration camps in the case of Hoa Lo (known to American POW as the Hanoi Hilton). Today, the Vietnamese welcome us; they want our money and support against the Chinese, who have usurped the waters of the South China Sea that have been claimed by Vietnam for centuries. The Chinese want the oil located beneath its waters. In my book When Brothers Meet I warn about China's and Russia's global intentions about controlling the world's supply of oil.

FQ: Do you feel that PTSD can be treated? Do you agree with how it is being treated?

HARDY: I don't feel qualified to answer either of those question, Amy. But keep in mind, that Navy Seal Chirs Kyle, America's top sniper in Iraq/or Afghanistan, was murdered by a PTSD patient he was trying to help.

FQ: Can you provide something to hold your fans over? Such as, what is on tap when it comes to your next creation?

HARDY: I am working on a book that deals with interplanetary space travel. The sun of Rau (Proxima b in the Constellation Centaurus) is dying and its people are looking for  new planet on which to live. They are a friendly and advanced civilization that has much to offer planet Earth. NORAD sees the tiny blip on its radar screens which is one of Rau's spaceships at 2355 every Christmas Eve and calls it Santa's Sleigh. They begins to think it is an enemy agents aircraft that  sneaking into the country in an effort to attack American interests and government. China, with the aid of huge American trade deficits, is now the most powerful nation in the world and is challenging America for world eldership, and has formed an axis with Russia with the intent of ruling the world. Together the axis military might dwarfs that of the United States.. Will the US president convince Rau aliens, with their superior weapons and metallic soldiers, save the free world from the axis super powers and their  nuclear holocaust plans? Stay tuned and find out!

To learn more about Whisper In My Ear (Vol III of III) please read the review. 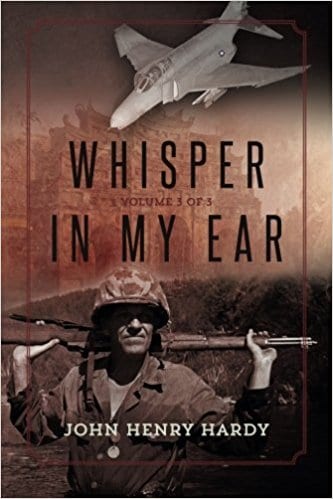