FQ: This series definitely gives women a large role in the war. Can you give a little background in regards to Cathy Addison? How she came about; what made you wish to give her such a large role in what some would call a “man’s universe?”

HARDY: You can call it a man's universe Amy, but it is not and never has been solely the men who fought in wars. Women have played important roles in all wars in which the US has been involved. Some disguised themselves as men and served in battle, especially during the Civil War. Women have not always served in combat, but they have always played an important part in the defense of our nation in one way or another. The men did most of the fighting and still do; however many women have been killed or wounded in WWII, Vietnam, Iraq and Afghanistan. I have a daughter that served in the air force and another that was in the navy. The role of Cathy Addison in the story is typical of what a lot of women endure in war zones, and I inserted Cathy into the story as a main character as a tribute to all the women who have ever worn a uniform for this country, and I am hoping they will continue receive the respect and recognition they so richly deserve.

FQ: In regards to the above, and having spent thirty-three years in the U.S. Marine Corp., can you talk a little bit about your views when it comes to women’s recent uprising against certain things? Do you feel they warrant this, for lack of a better term, revolution and should seek justice?

HARDY: This question really left me scratching my head, Amy! I am rather ambivalent about the current situation, whereas women are reporting that they were sexually harassed twenty or thirty years ago. Any crime committed against any human being needs to be reported immediately, and the criminal brought to justice if found guilty. A lot of these women (but not all) , who endured such treatment, put up with it to enhance their careers or social position at the time (such as the Harvey Weinstein case), and now years later they want justice?  Putting up with that harassment at the time for personal gain was a choice they made at the time. In the Marine corps, any known or reported infractions or crimes are addressed immediately. In light of the current events, I guess each complaint needs to be judged on an individual case basis, and some charges such as those fostered by liberals against the president are politically motivated-in my opinion.

FQ: This series, thus far, has been so moving and so emotional, are there times you need to “walk away” from the computer keyboard and take a breath, or did this story “pour out” of your mind all at once?

HARDY: What I realized Amy, was that when I get emotional-and I do-it keeps me glued to the keyboard-and my fingers work in harmony with my brain and I can't walk away; that is when the story "pours out" of mind mind and I don't want to quit. However since I am also my wife's full time caretaker, I get a lot of "breaks" I really don't want to take. Otherwise, if I do "walk away" at other times its because I can't think of what to write next, and if possible I sit quietly somewhere else to plot the next sequence of events.

FQ: Along those lines, can you tell readers what a “John Henry Hardy Perfect Writing Day” is like? Do you have various things that must be done in order to get back into the flow of the story after taking a break? (Example: Do you need to write outside, in a den, have music in the background, need total silence…etc.?)

HARDY: A perfect writing day for me, Amy, is perfect silence. I am a very conscious person, and any thought of a pending task or question greatly disturbs my creative thought process. I am simply forced to react and usually lose my whole train of thought.

FQ: When you finished work on this, Volume II, did you head directly into writing the grand finale? And, did you know how it was going to end before you even began?

HARDY: To be honest with you Amy, I wrote this story as a single book and not a series. I did a lot of research, interviews of combat veterans, and read several books and numerous newspaper articles to make certain I got the facts of the war straight-especially the horrible treatment of our returning veterans. My emotions kicked in, and I just kept on writing. It was the publisher that convinced me to break the book down into a series; it was a good decision. Whenever I write a book I always know the beginning and the end, but they are only a few sentences in my head. I must do a lot of "fleshing out" throughout the book to make the story work.

FQ: Can you give readers a “sneak peek” of what they will see for these characters in Volume III?

HARDY: Volume III looks at what happened to the main characters towards the end of their tours of duty and when they arrive home. A prior book reviewer said, "Volume III morphs into a soap opera."

What that reviewer doesn't realize is that there is life during a war, and after it is over everything and everyone has changed, including the survivors and those on the home front. Everything changes for the veteran but love; it is the one thing that keeps a soldier's hopes alive during a war. For the combat soldier and everyone else involved in wars, the word home has a magical ring to it. Dion Murphy and Cathy Addison are court martialed and charged with murder; Norman Coddington is shot down over North Vietnam and is captured and tortured for years in the Hanoi Hilton (Hoa Lo); the facts of the North Vietnamese torture of prisoners is verified by other POWs; Barbara Mandera returns to the Philippines and marries a man of infamous notoriety. But that is not how this story ends!

FQ: Are you currently working on another book?

HARDY: Yes I am Amy. It is about UFOs and space travel to another planet inhabited by an advanced and peace loving race,  but their sun is dying, and they are looking for a new home. However, US government officials believe the blips seen on NORAD's radar screens every Christmas Eve are really foreign nationals infiltrating the country and that they are bent on destroying the United States.

FQ: As a writer, the question of what one can do to become a better writer or a published author is asked a great deal. So, let us flip the coin: If there was one thing you would recommend or “teach” to those who want to write in regards to the negatives of this craft and what they need to avoid, what would you say?

HARDY: My advice to any new writer (including myself) is to say that if writing is not your passion you may as well forget it. In extremely rare cases, such as J. K. Rowlings'  Harry Potter series, you can sell millions of copies of your book without paying a dime to a publisher. As an indie publisher, you are going to have to pay someone sooner or later, and you will be surprised at the number of scammers out there. I have heard of authors, who literally paid thousands of dollars to have their manuscripts edited only to have them appear in print with the same mistakes make in the original copy. There are several sites on the internet that offer advice on which publishers are reputable and those who are not; do your research and fine your best choice.

FQ: The violence in this country seems to be escalating on a daily basis. Do you have any personal views as to what is causing this and what, perhaps, people could do to end this violence?

HARDY: Violence has been a part of humanity since the stone age. But additional guns laws aren't the answer. Anyone wanting to kill people can use, knives, swords,  baseball bats, golf clubs, homemade bombs, etc etc etc. Perhaps vetting the buyers, shutting down random gun shows and sales, and enforcing a waiting period would be more effective. But most important of all, is the mere pittance we spend on mental health issues in this country-that is the heart of the problem. With better mental health facilities, the mentally ill could be identified sooner before another  tragedy occurs.

To learn more about Whisper In My Ear (Vol II of III) please read the review. 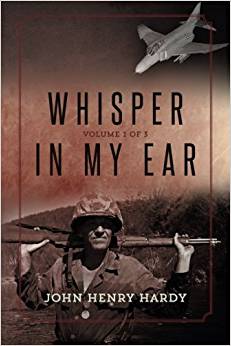