Today, Feathered Quill reviewer Barbara Bamberger Scott is talking with John Fennell, the author of of Raven and the Panther

FQ: You say in your biography that much of what you write links directly to events in your life – can you give a specific example in Raven and the Panther?

FENNELL: Raven's upbringing in the book is almost identical to the real Raven Anderson (who is my wife Barbara Ann). Barbara was raised by her grandmother and uncle, as was described in the book. Raven's personality is almost like Barbara's, although embellished for reader enjoyment. This connection I had in real life drove me to develop Raven Anderson's character.

FQ: Did you make a conscious decision to highlight heroines more than heroes in this book?

FENNELL: Absolutely, I was the youngest of four children, the other three were girls ranging from 5 to 15 years older. Each one of my sisters were very successful in life, even as young teens/adults, they were highly motivated and driven. I guess that must have had a tremendous influence on me. Even early on in my life, they were spaced apart enough in age to show me a different perspective of life from their point of view, because of this, I somehow picked up on their life experiences. With that being said, I have the upmost respect for heroines due to the environment I grew up around. They were three unique individuals with different personalities.who played a big part of my childhood.

FQ: In your experience, is it typical for people in mining communities to want to stay near home, as Raven insists on initially, and to be involved in the production of coal?

FENNELL: Yes, I was involved in coal mining and worked shoulder to shoulder with hundreds of men and woman. Coal miners is a very high paying profession often out-pacing the average mining engineer's salary due to the danger and hard physical work. It doesn't matter if its underground or surface mining, I don't know of very many who have moved and left mining as their source of income.

FQ: By the end of the book, Raven has decided to leave home, leave the US – does this suggest a sequel that will reveal a change of heart?

FENNELL: Yes, the second book, Raven Gone Rogue is out and the third book, Raven and the Code Book is finished and ready to be released. In these two books I focused on developing Raven's character along with additional characters to provide more exciting adventures in both Europe and the Caribbean.

FQ: Does your interest in brain technology have some connection with latest scientific advances (such as the idea of living forever)?

FENNELL: The human brain has always interested me. The idea that we only use a small percentage of our brain fascinates me. This brings me to my other series, John Vacara. John was injured during WWII and captured by the Nazi's who preformed an unprecedented operation on his brain, enhancing his gift he was born with. Actually both series intertwine one another. I often use characters in the Raven Anderson books that originated in the John Vacara series. The Panther is a main character from the John Vacara series The Diary.

FQ: The character Naci seems to have special protection from you as the author as well as from other characters, including Raven. Is he being saved for something special in a future volume of this series?

FENNELL: Actually Naci is me, so yes he loves Raven, but at the same time understands where she is coming from. Naci was planted in Raven's home town for one purpose only, to persuade her to become an agent for The Foundation. The problem was, he fell in love with her which set up unusual situations in the book to add reader interest. Another reason I give special interest to Naci is he will have his own series in the future.

FQ: What in your West Virginia upbringing has the strongest influence on this novel?

FENNELL: Born and raised in West Virginia, I always wanted to travel and explore the world. Yes, I was one of the very few miners who gave up the coal mining life to move onto other things. I still have a strong desire to become a better writer and provide enjoyment to those who read my novels. Not moving from West Virginia, it would have been very difficult to develop these stories. I think that was the biggest influence for both series, particularly Raven and the Panther. I have traveled to almost every location described in my novels. This alone, has helped develop stories in my mind.

FQ: Besides Raven, who is your own favorite person in this story? 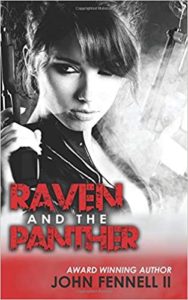