FQ: Your ride took place in 1974, but you waited until 2017 to publish your own account of the experience. How do you feel this distance from the event has affected your documentation of it?

EGENES: I’m glad I waited. I wrote a manuscript shortly after the ride but knew immediately that it wasn’t a good effort. It was because I was too close to the material, still living within the shadows that the ride cast. Hopefully, the years imbue a bit of wisdom and a sense of purpose in a person, and I like to think they’ve done that for me [smiles]. I was able to view the ride with both a macro and a micro lens, to be able to see the big picture and the details within. And it was great to be able to compare and contrast things today with those of yesterday. But I didn’t want to pine away for the good old days, and I think I managed to steer clear of that. The passage of time has given me a perspective that I think made the story much better.

FQ: During your ride, you seem to become somewhat frustrated with media coverage interfering with your journey. What led you to the decision of writing a book and thus creating a kind of media coverage of your own?

EGENES: The media coverage was frustrating at times, but it was more of an annoyance than a real problem. And I suppose yes, writing the book has created media coverage, but I certainly don’t mind it this time (I’m not riding a horse!). In fact, I’d like mind more of it. As corny as this sounds, I reckon I want Gizmo (my horse) to be recognized for what he did. It’s no accident that I put his picture on the cover.

FQ: What is one thing you wish you would have done differently on your journey and why?

EGENES: I’m not sure that I have second thoughts about what I did and didn’t do during the journey. There are many things I wish wouldn’t have happened, and almost all of them involve hardships for Gizmo. There are probably things I wish I would have known beforehand, but a large part of the reason I took Gizmo out on an unknown trail was to experience new things, to learn about the country and its people, and to spend a significant amount of time alone. And I was able to do all of those things. I certainly didn’t do things perfectly [laughs]. I made a lot of mistakes along the way and I definitely had more than my fair share of screwups. But fortunately, I’m a quick learner.

FQ: What were some of the challenges you faced returning to regular society after your ride? Was there anything you were glad to have back?

EGENES: Coming off of self-imposed isolation is difficult, but you don’t realize it for quite some time, until you’re back into civilization and trying to fit back in. At first, I was overjoyed to have finished the ride, to have a horse who was still in one piece and healthy, and to make it home to California. And I know that in his own way, Gizmo was, too. But it’s inevitable that you start comparing your life back in society to what you lived on the trail, and sometimes it just doesn’t quite measure up. Still, I was happy to get back to playing music, to seeing my friends, and not having to worry about finding water for my horse every day [grins].

FQ: Did you receive any criticism along the way (from friends and family, media outlets, etc.) that you felt was unfounded? How did you handle press coverage you disagreed with?

EGENES: Before the ride there were certainly those who thought I was crazy to attempt such a thing, and that it was impossible. I expected that—actually, anyone who attempts something like that probably expects naysayers—but I have always deflected those sorts of opinions. I’ve always followed my heart, as I did in this case. And though I disagreed a bit on some of the things said in the news, none of them were earthshaking, and none really made a difference in what I was doing. So in the end, that part didn’t really matter to me. For the most part, the press was overwhelmingly friendly and supportive, and I still appreciate that to this day.

FQ: How did Gizmo re-acclimate to life off the trail once your journey was finished? How was he changed after the experience?

EGENES: I worked Gizmo for about a month after we got home, a bit less and less each day. It’s not good to work a horse very hard every day for a long time, then just let him stand in a corral or a stall. So I sort of “re-acclimated” him to a life of leisure. After that, I turned him out to pasture on about a thousand acres, with some other horses and mules. He spent about a year up there, and I’d go up to see him often, just to visit, check his feet, and see that he was healthy and to give him a Snickers bar. The ride ruined him as any kind of show or working horse prospect. He had a definite mind of his own, and he did things his own way. But he was great to ride, wonderful on pack trips into the wilderness, and he even carried my daughters around when they were very young (and he was very old). And for the rest of his life he always whinnied and came running whenever I showed up.

FQ: Your love of horses and respect for other animals is evident throughout your book. Have you always gotten along with them? Is there any animal you would not like to meet?

EGENES: Yep, I’ve always gotten along well with animals. Having raised two daughters who are both horse people, we had dogs and cats, horses and mules, donkeys and goats and all sorts of critters. My youngest daughter Julia is now a veterinarian, in fact. And today, my wife and I live with three cats here in New Zealand. Animals have always been a huge part of my life. And I’m not sure there’s an animal I wouldn’t want to meet. And again, it sounds corny, but every single critter on this earth is beautiful and amazing in its own way.

FQ: Have you ever revisited any of the locations you passed through on your journey? Is there any one place that stuck out to you during your travels?

EGENES: I’ve been to some of the places out west, in the Mojave Desert, the Painted Desert, and various places in New Mexico, Arizona, Texas… all the way through to Tennessee. I didn’t really set out to revisit any of them, but whenever I’m on a driving trip and I get anywhere near my trail route, I try to go visit it. It’s always interesting to see the places, and to see how well my memory has preserved them. It’s always amazing when I drive for an hour along my trail, then realize it took four or five days to travel the same distance with Gizmo. The one place, overall, that sticks with me is the Painted Desert, on the Navajo Reservation. There are some specific spots, but I don’t want to advertise them, out of respect for the people who live there.

FQ: If you had the opportunity to repeat the experience all over again, would you? Why or why not?

EGENES: Probably not across today’s America, but maybe somewhere else. During the ride I often went into the library in some little town and would look at the world atlas. I’d hatch plans to ride across China. Of course, in those days China was not accessible to Americans, but I dreamt I could ride across the breadth of that great country. It would have been something, and I probably would have pursued it had the political climate of the day been different. Not sure I’d be up to it today [laughs]. 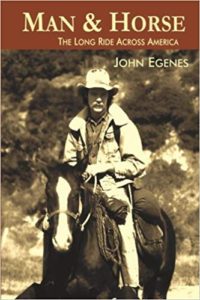