FQ: This is one of those questions I have to ask. Is it difficult being married and being a writing team? What is the biggest benefit that comes along with that scenario; and, is there a way to just “shut the book idea down” for a bit when need be?

JIM AND STEPHANIE: Good question! We had careers in different industries, and it had always been our dream to find a way to work together. Writing side-by-side is fulfilling that dream, although there were trials and tribulations while figuring out how to make that work. The secret? Let go of the ego. The biggest benefit is every writer has their own strengths, and we’ve learned at what point in the process each of us excels. Also, it’s wonderful to have a cheerleader during those times when doubt and insecurity tries to take hold. And yes, it is hard to shut down the book ideas, but luckily we have a young dog who won’t take “no” for an answer when it’s past his walk time.

FQ: Do you each take a set of characters to write at the beginning of the project, or does that “ownership” come naturally as the book progresses?

JIM AND STEPHANIE: At the beginning, plotting is the most critical step to ensure we’re on the same page (sorry for the pun) about what happens when, and most importantly, how the story will end. We write the first draft by dividing the chapters. After a few rounds of our own edits, we swap and keeping refining the writing and plot to the point where we forget who originally wrote what. We don’t assign characters. Jim typically takes the scenes with backstory and action scenes, and Stephanie focuses on dialogue and cutting scenes that don’t drive the story forward.

FQ: Did the idea first stem from Orfyn; where did the idea of Orfyn first come from? Although all your characters are fantastic, there is something about his timing and skills that make him extremely memorable.

JIM AND STEPHANIE: Creating Orfyn was one of those times that makes what we do feel almost

magical. Stephanie was playing around, just writing for fun, when this sentence appeared: “Depending on your point of view, I’m either famous or infamous.” Then, a sensitive street artist named Orfyn came to life. It was so strange because, back then, neither of us knew anything about street art. Lake was supposed to be the protagonist, and even in the late-stage of editing Lake’s chapters were first. But Orfyn kept stealing the spotlight, and we finally led the story with him. So the first line ever written actually formed the story and remained to become the beginning of the book.

FQ: Can you share with us a writing day in the life of Jim and Stephanie: Is there a specific place you work? Does your beloved dog ever play critic or reviewer? Does the Colorado majestic scenery help creatively, etc.?

JIM AND STEPHANIE: Jim likes writing in coffee shops, and Stephanie prefers working in our home office overlooking the mountains and forest. We live in a tiny town at the edge of the Rocky Mountain National Park, and our daily walks with our dog, Finn, are a big part of the process. That’s when we plot or discuss scenes. Getting away from the computer and strolling around the lake clears our heads so fresh perspectives can emerge. And, Finn is only a critic when we take what we’re doing too seriously and forget to have fun.

FQ: It is stated that you regularly speak at writers’ conferences, as well as colleges and high schools to help others achieve their writing dreams. Can you perhaps share with our readers one of the greatest or most memorable moments you experienced with either a reader or future writer?

JIM AND STEPHANIE: After we’d written a manuscript that didn’t sell, Jim took some classes at Metropolitan State University at Denver. Thankfully for us, this included Young Adult Literature and Creative Writing. Now, we speak about the craft of writing at these same classes, which is always a thrill. The message we share is we’re proof that their dreams of being an author can come true. We often hear from these students later, and we always respond to their questions. Our biggest honor is “Merged” is included in this semester’s Young Adult Literature curriculum, and in a few weeks we’ll be speaking to that class after they’ve read the book, which will be a first.

FQ: Along those same lines, is there a piece of advice you give when it comes to being a successful author one day?

JIM AND STEPHANIE: Attend a writer’s conference. These events are important in so many ways. There are a wealth of classes on writing and about the industry, and you’ll hear famous authors speak about their journey. Also, this is one venue to pitch your story and find a literary agent. But even more importantly, you’ll meet your tribe. Writing can be such a solitary endeavor, it’s wonderful to realize you’re not alone. The attendees are in all stages of their career, from just thinking about writing a story to multi-book published authors. You will never meet a more supportive, inspiring group of people.

FQ: Because you are world travelers who love to see things, like ruins and obscure historical sites, can you tell us about one place you saw that completely blew your mind, and why? Is there a location you have not yet visited that is most definitely at the top of your ‘bucket list’?

JIM AND STEPHANIE: Jim has been writing a story that deals with the North American mound builders from a thousand years ago. During his research, he discovered that mounds can still be found in Wisconsin. During a visit to Madison, we suggested to our friends that we find them. Unbelievably, some of the best preserved mounds were in a cemetery one mile from their house. Our girlfriend works with a pendulum, and the earth’s energy emanating off these mounds would transform any doubter into a true believer. So, one of the most awesome places ended up being right here in the United States. We love exploring Ireland, which has so many of these sites, both ancient and modern. We’re still hoping to see a crop circle, and of course, the alien remains at Roswell.

FQ: As an already annoying fan, which everyone will be the moment they read your book, I have to ask: How’s the second coming along? Can you give us a “sneak peek” at a character that may take on a bigger role; or, a new character who may simply take over when it comes to penning the next book?

JIM AND STEPHANIE: The sequel to Merged is plotted, and we’re currently working on the first draft. The stakes are bigger in this story. The mysterious Mind Sweeper virus is targeting and destroying the mental capabilities of teens with high leadership, academic, or athletic skills. Stryker plays a bigger role in this book while he and the next class of Nobels try to save the future leaders of their generation. But don’t worry, readers will get to follow Orfyn and Lake to see if they ever find each other. 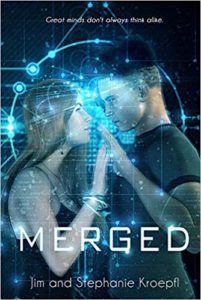