FQ: It is obvious that Jane Austen and Pride and Prejudice (an author and a book that I completely adore) have really shaped what you have written in this novel but where did this interest in her come from and was it difficult for you to pick up the pen (or in the world today, sit at the keyboard) and try to continue what she started so many years ago?

WOLLAK: It all started in college when I read Pride and Prejudice for the first time. I found the approximate time when Ms. Austen’s novel was published intriguing and thought it would be interesting to read more classic literature. I remember my roommate’s friend marveled at the stack of books I acquired (including Jane Eyre and Vanity Fair) – did I really have time to read something other than textbooks?

I’m glad I did and expanded my reading over the years from that beginning. I loved Pride and Prejudice from the start, and it’s my favorite novel of all time. I also love Persuasion and Emma. And the various thoughtful or hilarious completions of Sanditon, in either novel or film, have been delightful!

Over the years I enjoyed reading continuations, prequels, and retellings of her novels so much I thought it would be fun to try and write one myself. It was definitely challenging for me to use Ms. Austen’s characters and continue their stories. I wanted the story to be believable and interesting to the reader, but also appropriate to the period and its location. Obviously, a lot of research was needed, and thank goodness for my faithful readers who pointed out some factual and societal errors!

FQ: The book is very well-written and very proper in terms of the locations and language and family dynamics throughout the story. How hard was it to accomplish that being a native of San Francisco and not from England or having lived during that time period?

WOLLAK: It was difficult. After all, the novel takes place in a time and culture different and much removed from our own. Why should we care about these characters and what happens to them? But we do, and we want more. Even now with two novels published, I don’t consider myself to be an expert on Ms. Austen and her world. But as an author I want to be as faithful and accurate as I can be to her own works.

Even in my first novel (Insight & Suitability), it was hard not to use contemporary expressions. I tried very hard to edit them out, but in the end, I let a few remain. (For example, characters “shooing” someone else off, and Frederick’s fear his father “would kill him” for making a mistake that ruined his meeting with important gentlemen). I tried to make the text and dialogue sound appropriate for the time, but thought it acceptable to leave a few reminders that this story was written in the early 21st century. I also hope that may help make my story more timeless in its appeal, accessibility, and applicability to our current lives.

FQ: All of the characters are very interesting and well-written. Do you have a particular favorite, after Frederick of course, in the story? And I have to ask, who was your favorite character in Pride and Prejudice? I am wondering if the answer to both questions will be the same.

WOLLAK: After Frederick, my favorite character is either his brother Nick, or Tom the driver. After all, it’s a boy/young man’s story! As for the female characters, my favorites are Julia, Jane, and Anne. I picture Julia being played by a teenage Elizabeth Taylor (one of my favorite actresses, thinking of her performance in Little Women from the late 1940s). I haven’t cast Jane or Anne, but I savor their spunk and determination to become something other than what is expected of them.

My favorite characters in Pride and Prejudice are, of course, Elizabeth and Mr. Darcy; I love the other characters so much that I can’t make another choice. My least favorite character was Mr. Collins – I couldn’t bear to write much dialogue for him in Insight & Suitability; the novel was already long enough without trying to emulate his long discourses!

So, after all that, it means my answers aren’t the same.

FQ: You took some major risks in the story, given the time period, such as an unwed mother and an attempted suicide. Did it worry you that it might be too much for the reader to accept?

WOLLAK: I took risks, but didn’t worry that it might be too much for the reader to digest. I think contemporary readers are equal to the challenge, and the characters needed to experience serious situations so that the story wasn’t just one big living happily ever after. I was more concerned that their experiences be believable and interesting enough to hold the reader’s interest and keep the story moving.

As an author, I had to try to make these situations believable enough that they had occurred, that they contributed to the story’s development, and were not just cheap “headline” spikes. Everything that occurs to everyone, especially Frederick, had to dovetail towards an ending, when absolutely every story line and specific point came to a complete resolution and a gentle, but firm end.

An unwed mother and attempted suicide are a lot to inject into the Austen/Regency world. Insight & Suitability came first, a comedy of manners, and my attempt to be faithful to all of Ms. Austen’s novels. Distress & Determination needed to move beyond that drawing room/ballroom world and give readers a window into other real-life situations that the characters could experience. I hope readers enjoy this journey!

FQ: While all of the characters are wonderful, I especially enjoyed the fact that both Frederick and Jane were so emotional and honest in their speaking to others and about themselves at times. I know that these types of emotional speeches made to family members were not the norm for people living in this time-period. Was it hard to write these scenes?

WOLLAK: It was very challenging to write them, but I wanted to bring the characters alive for the reader. I wanted to infuse the scenes with drama that was believable and appropriate, and make their experiences accessible and timeless. I tried imagining the characters speaking my dialogue, as if they were in a movie, and that made them become real to me so that I could write for them.

FQ: Are there any other authors, besides Ms. Austen, who had a large effect on you as you embarked on your writing career?

WOLLAK: I read only mystery novels for years; so, in terms of mystery fiction, Agatha Christie, Sir Arthur Conan Doyle, and Ellery Queen are foremost among many excellent authors that influenced me to write. Elizabeth Daly, Ellis Peters, James Lee Burke, and Ruth Ware too. Long ago I wrote two mystery manuscripts I would like to revisit because they are so awful!

I also like horror fiction and the macabre, so H.P. Lovecraft, Lord Dunsany, August Derleth, Shirley Jackson, and Stephen King are great influences.

I read some fiction that is not Jane Austen or ghost related, but I can’t name a favorite contemporary author because there are too many novels that I’ve read and enjoyed.

FQ: Is there another time period or author that you would like to try to work on or continue as you have done in this case?

WOLLAK: I’ve always been fascinated by the Roaring Twenties and the grim Thirties. Since I’m a third-generation San Franciscan, I’m also interested in setting stories during times in the city’s history, even around the time of the 1906 earthquake and fire – or earlier, since the Gold Rush.

As for an author to emulate, I’d like to continue trying to write more short stories in what I think is a Shirley Jackson vein. I find her stories so unsettling and intriguing; she is a master at launching a story with seemingly ordinary people going about their ordinary lives, then introducing an unexpected twist, or having one of them inexplicably and unexpectedly acting in a petty or cruel way. She understands human nature to its molecular level, and her fiction is so thought-provoking as to what is motivating her characters in what they do and speak.

FQ: Please tell us what is next for Frederick and his sibling!

The second half of the story finds Frederick returning to Cambridge to try and succeed in his studies. After a couple of terms, Julia and Jane make their social debuts during the London season. Frederick acts as their escort, and the siblings experience a variety of adventures as they navigate the pleasures, challenges, and expectations in high society. Will their lives be the same once the glittering season is over? And how will the story of the Darcy family continue after that?

Maybe I will need to give the second part a new title, but that remains open.

In closing, thank you very much for this opportunity to answer your wonderful questions and share with your readers! 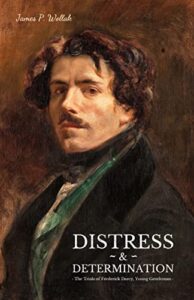