FQ: First, thank you for your service!

And now for the questions. First, I’m sure you get asked this a lot, but I have to know...how does a Green Beret turn author and start writing romance novels? I suspect most people would think you’d write tough guy/action/mystery type books.

WALISZEWSKI: I’m a romantic at heart, and a book worm as well. Also, a Green Beret is slightly different than ‘all the other’ Special Operators. We are all taught another language, we often live with and next to our partners, and our greatest weapons aren’t our guns, rather, our skills as Warrior Diplomats. A great example of this is that on this last (and final) mission to Afghanistan, we were direct personal advisors to the last Special Operations General of Afghanistan – Sami Sadat – This relationship is captured viscerally by National Geographic in the movie Retrograde, which was directed by Matt Heineman and just debuted in Telluride, the Zurich film festival, as well as a few others. Here’s the teaser link www.youtube.com/watch?v=LeCEhBvfgOc (For reference, I am the ‘bearded guy’ seen in the first 12 seconds.)

FQ: Is it true that you wrote Air Boat while stationed overseas? If so, would you tell our readers how that happened?

WALISZEWSKI: Absolutely. I started writing Air Boat while in Afghanistan in 2021. I was on the last SF team (12 Green Beret’s) in Helmand, Afghanistan. In those last few months, our stress levels were through the roof because we didn’t know how it would turn out (Were we evacuating? Were we staying behind and fighting? Are we going to hold out like the Alamo against the Taliban?)

To top it off, a 20-year war was ending all around us and it was mind blowing.

In the midst of this, I found myself walking through a very post-apocalyptic landscape of buildings, roads, and memories, some not ones I wanted to particularly revisit. So I wanted to read something, that could distract me fully.

I found (read: I broke into) an old abandoned USO library, and looked through all their dusty books, some looking as if they’d never been read before, others holding onto whatever glue hadn’t dried out in the multiple 120F summers they had spent there. I would pick up a book, read the first page, and put it down. Pick up another book, read the first paragraph, and put it down. I’d try to start in the middle of a different book, but it didn’t work for me either. Nothing resonated. The books were too stereotypical, or they were too fantastic, or they were too romantic, or too predictable. I couldn’t believe them, let alone find the time to absorb from them what their author had wanted me to discover. In short, I couldn’t let the book do what a book was supposed to do - to tell a story that would serve as a time machine to another world or place in history. (I hope I’ve painted the picture of where I was when I was trying to find a book to read, no doubt the reason I couldn’t find one!)
So what did I do? I started writing the book I wanted to read. To make a long story long, that was the genesis of Air Boat. A frustrated Green Beret, in the heart of Afghanistan, seeking a place to escape to, where love and friendships are paramount, and adventure is never too far behind.

FQ: Have any of your military buddies read the book? What has been their reaction?

WALISZEWSKI: Several of the guys I work with have bought it - they told me they bought it for their wives or girlfriends - but in private, they tell me that they also read it after their significant others had, and really liked it. I won’t tell you their names, but I assure you it’s been a few very macho men – ha! Also, when I was writing it in Afghanistan, I shared the story with my guys in between when we were working, and the next day, we’d be in the middle of a meeting or operation, there’d be a lull, and they’d turn and ask me, “So what is Luke up to?” or, “What’s Saint getting into today?” and I realized that I wasn’t only creating a time machine for me, but also for the guys I was with.

FQ: The chapter where we go back in time and see Luke returning home to an empty house was so sad. Was that a hard chapter to write?

WALISZEWSKI: This was a difficult story, yes. In part because I combined two true stories to write it. One was mine, where I came home early from a deployment and no one was home when I got back (my phone had broken and circumstance dictated that I didn’t have a spare key) and another friend of mine, who came home and his fiancé had left him. He and I shared a few poignant moments and points of honesty over this, and when I asked if I could combine elements of his real life and mine to help explain what it sometimes feels like when you come home to a different world, where no one remembers your name or they care more about things like bake sales and HOA dues, he immediately said yes. But what’s more important, perhaps, is that ‘bearded guy’s return’ chapter wasn’t just a subset of my story or experience, but a lot of the guys with whom I work with, and it seems to have resonated.

FQ: How much of Jacek is in Luke? Or perhaps he is based on a friend or an amalgamation of several friends?

WALISZEWSKI: I work with a lot of phenomenal GBs that I admire and look up to. At first, I really drew on their characteristics, but then Luke (and Stella and Saint) became real people. I would get lost in their story and I wanted to do right by them. At a certain point the book was no longer about me telling a story in a book, it was about Luke and Stella getting their story out in the world. And there at the end, when Luke had to commit and make such a hard decision, I would be lying if I didn’t shed a tear knowing that I was responsible for creating that world.

FQ: The chapter where Luke is planning on returning Saint but does all he can to put off the inevitable was heartbreaking. I found myself hoping Luke decided to keep Saint and I think, for me, that’s when Luke really came to life and I really cared about him. Was that the plan? To show Luke’s gentle side?

WALISZEWSKI: I wrote from a place of honesty. Luke is a man who wants to do right by the world, even if there is a significant degree of personal sacrifice. Saint represents the one good thing Luke has found since coming back; a quiet understanding between the two, one of respect and love. So for Luke to have to choose between doing the right thing, and sacrificing himself just one more time, was critically important to showing him to be as human as all of us are. I wrote it in a way that I knew I would feel, a disjointed frustration between right and wrong, and I’m glad that the struggle felt real to you because it was very real to Luke.

FQ: I love the way you describe certain minor characters by a trait or clothing item - “The Bearded Man,” “Hat-Bro” - did these names just pop up as you wrote or were you thinking of trying something unique to define these characters?

WALISZEWSKI: Ha! Yes! (I’m laughing). This is my personal adaptation. I’ve travelled the world (4 continents, 40 countries) and worked with thousands of people from so many cultures in my time as a Green Beret. We (the collective GB community) often times find ourselves around a campfire or table retelling stories with our friends and family, and due to time and distance, we’ve sometimes forget what the person’s name was in the adventure we had just experienced, but we rarely forget them. So we give them nicknames, sometimes to continue the story, other times to exaggerate a particular characteristic. As I was writing Air Boat, when a character or a person who was worthy of mention came into Luke or Stella’s life, I found myself wanting to highlight them for the reader, but not necessarily distract the reader with anything more.

FQ: I’m guessing by the section where Luke meets the Russian ladies that like Luke, you too speak some Russian. I enjoyed that encounter as I too, know some Russian and so, found it fun to read/translate. Are you fluent? How many languages do you speak?

WALISZEWSKI: I was as fluent as I ever was when I lived in Eastern Europe for several years, and while I maintain some proficiency, it usually takes me a week or two to warm up my language skills. Right now I’m pretty good at Polish, still ok at Russian, and for a while I could speak Ukrainian pretty well. When I lived in Germany, my German was pretty solid, and when I was in Africa, after six months, my French was enough to get me into trouble and my Swahili was enough to get me out of it.

FQ: On your website, you mention being the son of Leszek Waliszewski, one of the original founders of the Solidarnosc movement in Poland. I understand you were only months old and yet helped with the movement. Do you recall stories from your father or anything else you’d like to share with our readers?

WALISZEWSKI: This is such a deep question and thank you for asking it. I had always been told about how my mom hid propaganda papers in my diaper and hoped I wouldn’t pee on them, and how my dad saw me for the first time after spending six months in prison. He relayed the story to me how his fellow Solidarnosc aka Solidarity members were so happy to see me they tore up some bed sheets and made a ‘prison’ birth certificate that I still have to this day. As I grew up more, he would tell me how he and Lech Walensa started working together, how he got arrested at the train station, about meeting Regan and briefing US Congress. My dad and mom are huge inspirations for standing up for what they thought was right, and restarting a life in America as immigrants with just two suitcases, two kids, a handful of dollars, and no English skills. Their struggles and sacrifices helped shape me to be who I am today, and I can never fully express my gratitude for their sacrifices.

FQ: What’s next for writing projects? Will we meet Luke and Stella again? (Please say yes!)

WALISZEWSKI: Glad you ask! While Stella doesn’t play a part in my next book, Luke and Kyle do. I’m halfway done with the Edge of Texas, where we follow Owen and Dakota through their romantic adventure. Owen is easy going but always planning, and Dakota is a journalist trying to gain inside access into US Special Operations in the middle east. Everyone’s plans are going great until Syria collapses in civil war, and Owen and Dakota have to work together to escape. 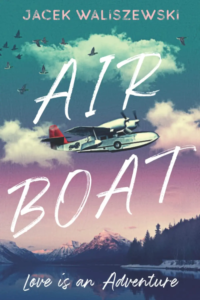