FQ: Have you traveled to or maintained any personal ties to Greece; if so, how did that affect your composition of this book?

KARAPALIDES: Yes. I still have family in Greece, both in Athens, and in the area where the story takes place, Macedonia, Greece. I also travel the Greek islands. When I am there, I am inspired by seeing the Parthenon in Athens or the monument to King Leonidas and the 300 Spartans, and to learn stories of the Ancient Greeks, but also the stories of the freedom fighters of the Greek Revolution of 1821, or the men and women that fought the Germans that parachuted into Crete during the Battle of Crete. Of course, just staring out into the deep blue Mediterranean Sea makes my mind race with a thousand stories. It all definitely inspires me.

FQ: A Promise of Remembrance is in many ways a positive story that shows how people can help others in times of need, directly and indirectly. Is that a theme that you will continue to pursue in future writing?

KARAPALIDES: Of course. I have written eight novels and novellas, in different genres, and this theme seems to be throughout them. My parents instilled in me the Ancient Greek concept of “Philotimo,” which is a Greek word hard to translate. The best translation of Philotimo is pride in self, pride in family, pride in community, and above all, pride in doing the right thing. Throughout my parents’ lives, especially during those horrible times of WWII and the Greek Civil War, they continued to live the concept of Philotimo, and how to live life. Unfortunately, my father passed away in September, 2021, at age 93 but my mother is still with us at age 91. They taught me Philotimo and how to live one’s life, and hopefully I have passed down the same to my children.

FQ: Does writing about the elimination of an oppressive regime give you a sense of hope in current times, or do you see bleak global scenarios developing now?

KARAPALIDES: “Oppressive regimes” are as old as Cain slaying Abel. Men and women throughout history have always sought to conquer and enslave others. Unfortunately, it is part of life ad of the world’s history. However, whenever someone tries to take your freedom away, there is always an individual who rises up and says “no!” When Europe fell to Hitler and Asia fell to the Japanese, the collective world said “no!” and tyranny was defeated. In my opinion, there will always be someone who says “no!”

FQ: Could you envision a feature length film or dramatic TV series based on this book?

KARAPALIDES: Yes. However, I have read thousands of books that I always think would make a great movie or TV show. Everyone has a story and these stories should be told, whether in printed form or up on the big screen (or on our little iPad screen!!). Someday I hope that fate will come by and choose this book or any other of my books to be made into a movie or TV series.

FQ: What is your favorite episode in this gripping story?

KARAPALIDES: The book is about a father and son and their struggle during the war, but the wives and mothers suffered just as much. In Paragraph 13, when Theodora (Vangeli’s mother) is stopped by the communist guerillas (known as “anadartes”), and they attempt to take her younger son Niko, as a recruit, she stands up to them. The Greek women of that time were tough. While their men were out fighting, it was the women that kept the family and the household together. They are the unsung heroes.

FQ: You’ve written quite a few books, many with an historical focus. Do you find historical fiction to be your “comfort genre,” meaning, it’s what you enjoy most?

KARAPALIDES: Yes. I am a student of history and history always sneaks into my writings. I feel the events of the past can be used today to show us where we should or should not be going.

FQ: You’ve written a few books about the American Revolution. What drew you to writing about this period? Also, I love the idea of your “Dates of the American Revolution” quick reference. This would be a perfect tool for schools. Have you had success getting it into the hands of students or are you marketing it differently?

KARAPALIDES: One of my most favorite periods in history is the American Revolution (and I do live near Philadelphia), and the person I admire the most in history is George Washington (close second is Alexander the Great). Obviously my first novel, Revolt, is a spy thriller based on the beginning of the American War of Independence. In researching the book, I would write down the dates of an event during the war, and I found myself with a long list! I got a calendar and wrote-in what happened on each day. The calendar started filling up. At that point I decided that since I had so many dates, I should just turn it into a book. The book did well. It is in many school libraries, cited in other research and text books. It was also cited as a research tool in Williamsburg, VA, and at archeological digs of a Revolutionary War fort in South Carolina. I have had several retired military officers comment on the book and recommending it to any student of history.

FQ: Your latest book, Go Tell the Mocha Man, is quite different from your other works. Would you tell our readers a bit about this newest tale?

KARAPALIDES: It’s aliens meet rock and roll! The main character, Homer Ulysses Jimi Hendrix Smith, is about to learn that the Universe is a very strange place, especially its love for Classic Rock! From escalators that travel through space to a classic car that is more than it seems, Go Tell The Mocha Man is a story that takes you from one world to another, with twists and turns as you your turn the pages of this science fiction adventure that is truly out of this world.

FQ: You’re a successful blogger at CosmosPhilly.com. How does having an active blog compare to the life of an author? Would you advise other authors to have their own blogs?

KARAPALIDES: YES!!! Write, write, write, and write some more! Whether you write short stories, the classic American novel, or just a blog, continue writing. For me, writing a blog and other articles exercised my mind and my imagination. If an athlete needs to exercise consistently to keep his or her muscles and body in shape, so does a writer need to consistently write to do the same thing for the writer’s mind and writing skills. And, one never knows; writing a blog may lead to bigger and better things! 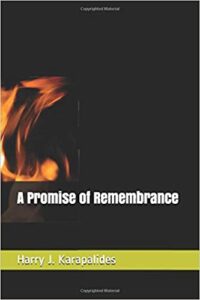