FQ: Who do you envision as the ideal reader for this book, the kind of person you hope most to reach and influence?

ANDRAE: That’s a good question but one I don’t have a specific answer for, in that when I sat down to write The Friends of Allan Renner I honestly didn’t envision an ideal “type” of reader or person who would or should be drawn to it. Because the book represents a hybrid of sensibilities in terms of the moods and subjects explored, the backgrounds of the characters encountered, the genres touched upon and so on, I would say that anyone with an open mind who isn’t too politically or ontologically rigid might possibly be into it--which isn’t to say all of said people will like it. Probably having a wry sense of humor would help. And having a bit of an intrapersonal streak, being drawn to cinephilia, the paranormal, being curious about people in general, and maybe being keen on literary fiction and cool music. But I would never assume a certain demographic should automatically be smitten with the book. My philosophy has been that once the book is out there, if people take the time to delve into it and they end up enjoying it, then regardless of who they are they should consider themselves “the target audience.”

FQ: You seem to be a very broad-minded thinker; how much of Allan Renner’s open, accepting attitude is really Dave Andrae?

ANDRAE: There are always going to be some sort of parallels or discrepancies between a novelist and his creations, and I have to be careful about mapping out that terrain in explicit terms. I would say that the general attitude of the book, as evinced through the dialogue, exposition, and various asides, is close to my own, even if the characters and scenarios are mostly made up. I think in general people should try to enjoy themselves and see if they can lean toward making things more enjoyable for others as well. So as an author, on this outing at least, I’ve tried to create something inviting that readers can get lost in, preferably off the internet—which is why I think people should buy the physical books. I see authoring a book as similar to hosting a party at your house: you don’t want people to show up and see you sobbing and drunk in your bathrobe with unkempt hair smashing dirty dishes on the wall and lighting the rug on fire. So a kind of decorum is in order, a mode of restraint and some affability, which isn’t to say things can never get a little crazy. Overall this book is an accumulation of that sort of vibe that elides most of the miseries and tedium that were incurred by its humble author while writing it.

FQ: The ending of this volume could be seen as preparation for a sequel. Do you envision that possibility?

ANDRAE: It was very tempting when the book was finished and the smoke had cleared to get cracking on a sequel novella or something similar. But I’ve officially decided against expanding upon it. I have my own theories of what will happen in that story world, how Renner will use his preceding experiences to achieve a kind of “self-actualization” mostly only hinted at in the book. But for all intents and purposes The Friends of Allan Renner will remain a hermetically sealed literary universe. It ended up being a stroke of good fortune that things came together the way they did, and I’m wary of jeopardizing that, of pushing my luck. Even if it were to one day become financially lucrative, I’d have to decline for fear of ruining something that sits fine on its own.

FQ: Have such psychic phenomena as astral travel mentioned in the book been part of your experience, leading you perhaps to speculate about worlds beyond our own? 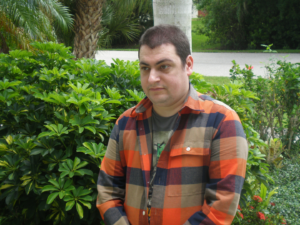 ANDRAE: I’ve had sleep paralysis twice, which was frightening, but I don’t think I’ve ever astral traveled. I’ve had exactly one intense experience of the vibrational state; late at night I was listening to a lecture in bed and kind of lost the thread of consciousness and the next thing I knew I was enveloped in an intense warm tingling sensation throughout much of my body. That may be the closest I’ve come to the sublime, but it lasted less than a minute. It’s the most relaxed I’ve ever been and if I could get that in pill form, it would surely get the best of me. But in terms of literal worlds beyond our own, as in aliens in other stars systems, I could talk your ears off about various theories related to that (The Great Filter, Drake’s Equation, the Fermi Paradox, etc.), but I haven’t had any direct experiences with it. I did once spot a strange momentary apparition while biking one night, which was the inspiration for a similar scene in the final chapter, but I can only assume it was a hallucination.

FQ: How long did it take to write this work, considering the many interlocking characters and plots that had to be brought together?

ANDRAE: The book took two years and some change to put together, from about mid April 2018 to early July 2020. It was written from beginning to end, with a refining of the previous chapters as it progressed. I wrote the first three chapters in Southwest Florida, the fourth and most of the fifth in Wisconsin, with the remainder of the book being completed back in the Sunshine State. The last chapter was written just as the pandemic made everything wonky and unpleasant; it was intense grinding it out while the world seemed to be falling apart, masses of people were dying, and the 2020 Election insanity was hanging over all of us, almost like an act of sadism. But as grueling as it was, I preferred having something constructive to work on that got me out of bed nearly every morning.

FQ: Would you characterize this novel as a mating of dystopia and utopia?

ANDRAE: I think it’s ultimately a humanist novel, leaning more toward a kind of utopian vision of humanity in the end, on an individual level, in that Renner can see himself and everyone else from a dignified remove via the Klybohxians. But there are nightmare visions within, not quite as nightmarish as some of J.G. Ballard’s work or a book like The Road, but Renner does speculate about a potentially grim future for humanity and it’s not hard to draw these same conclusions if one pays attention to the news and the internet or certain works of science fiction. As far as putting these things down in the book, it was a way of me grappling with these concerns in a more constructive manner than just typing them on social media and bumming out an unsuspecting stranger (as I’ve lamentably done in the past). In Chapter Six, though, the book takes on a critical attitude toward such lines of thought, in that Renner understands he might alienate Carmen if he goes on about it; he doesn’t want to run the risk of sabotaging a potential romance by coming off like a crank.

FQ: Is there a single author who influenced your choice to construct a central story glued to a wide variety of mostly separate characters?

ANDRAE: No, I can’t recall a single inspiration for that in literature, at least not one that was on my mind while writing it. But in terms of my personal life it’s often been that way, in that I’ve had several friends and acquaintances with whom I’ve interacted on some level, sometimes over many years, who might not have ever interacted with each other, or might not do so anymore, or who will check in with me in a sporadic, almost comically random manner.

FQ: Noting that you are a filmmaker as well as a writer, do you have cinematic plans for The Friends of Allan Renner?

ANDRAE: In order to pull off such a project, I think its budget would have to be far more substantial than the films I’ve made up to this point, each of which has had a total cost of well under $10,000. So there would need to be outside funding, a lot of it. And that would probably be contingent on a well written screenplay/adaptation, which I don’t have the wherewithal to write, having already spent so much time with the story. But if someone else whipped up a good screenplay and the funding materialized, i.e. if someone else did most of the hard work at this point, I’d be happy to work as a creative consultant and play a bit part in it, maybe as the haggard homeless man in Minneapolis who wears a Hypercolor shirt and likes robust tobacco. But I wouldn’t want to direct it. 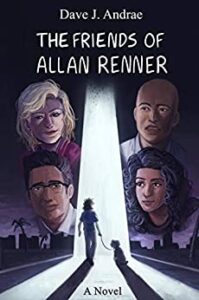