FQ: Dan, it was a pleasure reading this book. Per your bio, I know you grew up in Wyoming, so majestic mountain ranges made up your surroundings. Where and when did the idea for the warm seas of the Caribbean and the pirates sailing them come into play?

HENDRICKSON: Well, it was really not from the movies; Pirates of the Caribbean. I was born in 1962 and I grew up reading books like Treasure Island by Robert Louis Stevenson, and watching movies like Errol Flynn’s Captain Blood, The Sea Hawk, and The Master at Ballantrae. I dearly loved the Book Series about Captain Horatio Hornblower by Eneas Mackenzie from the early 50’s as well. So, I have always been fascinated with the pirate theme but after finding out in college history classes what a huge part of the Caribbean Slave trade they were involved in it took some time for me to come up with a story that would still satisfy my childish affection for the topic while dealing with their real world impact.

FQ: I had read that journalism was what you majored in; when/how did it come about that you chose the fictional world to write in over that path?

HENDRICKSON: I love the science of journalism in that one has to separate themselves from a story and present it from an observational point of view endeavoring to show all sides of the account. At least that was the ideal I was taught in college. My desire to write fiction began in my childhood and is something that has only rekindled in my heart in the last few years. So, my training as a journalist has caused me to want to tell stories in that same way. That is why I choose to write in the third person, and present tense. Because that is how a story is presented in a newspaper or on a television broadcast. I think that it gives a fun way to read a story because it allows the reader to make their own observations and judgments about the situations and characters. It is great fun to read the feedback in reviews and such, because others’ opinions of characters and situation vastly differ, and more times than not differ also from my intent in their presentation. Some might take that as an insult, but it tells me I put enough variety in the story to allow each reader to see their own version of the tale.

FQ: You practiced martial arts for a long time, earning black belts and others. Did you call upon this background when it came to the battles played out in this book?

HENDRICKSON: Most obviously in my character, Zhang Yong whom I portray as a man from China who is also a Shaolin Priest. The understanding of the ‘secrets of Tai Che’ and its universal practice in China is one of the key elements of the relationship between him and my character John Edwards. John had learned Tai Chi from a monk while serving in the British Navy but did not understand its practical application in fighting techniques until Zhang revealed it to him in the story. In the story I endeavor to show how though John was quite formidable before he met Zhang, his talent increased exponentially after receiving some training from him. Also, there are a couple of places in the book where Zhang and Captain Joshua are shown to “think alike” in matters of strategy and combat. This concept I got from the book entitled, The Art of War by Sun Tzu in the 5th century. It is a very well-known and well-read among both military and martial arts practitioners worldwide. In small ways, I endeavored to show that both men used the principles in the book in their thinking and strategy for combat.

FQ: Has the “swashbuckler” hero and villain been an interest for you since you were a child?

HENDRICKSON: Very much so. As I stated before, those kinds of books and movies have always been among my favorites.

FQ: Out of all the pirates in the past, do you have a particular one that was a muse, perhaps, when it came to creating them in your book? Which would you prefer to be cast as: the good or the bad on the high seas?

HENDRICKSON: Well, my character ‘The Scarlet Mistress,’ is based on the famous female pirate Ann Bonny of the early 18th century. She was of Irish decent and known for her fierce temper. I tried to portray the pirate life as something to be ashamed of and avoided. My intent with Brandy was to show her growth and transition out of that life by way of the help she received from people like John Edwards, whose character is based on people like Captain Horatio Hornblower, and Captain John Smith.

FQ: Give our readers a peek, if you will, at a normal “writing day” for you.

HENDRICKSON: I own and operate a full-time automotive body shop and detail shop and I still do volunteer Christian ministry work, so my writing can be sporadic. I try to get some in the mornings after I open my business. After those few precious hours, it is basically anytime and anywhere I can.

FQ: Is there an author, classic or present, that you would like to sit and chat with? If so, what would be the one question you would love to ask them?

HENDRICKSON: Ernest Hemingway. He also was a journalist. In literary circles he was accredited to have introduced the use of shorter sentences, and paragraphs in his fiction writing. Although controversial at the time his style has since hugely changed the way people write books. Thus, making the reading of novels more popular and easier. I would love to talk to him.

FQ: I read that you are working on several more books at this time; can you let our readers know what to expect in the future?

HENDRICKSON: Right now, I have two in the works. The first is based on one of my main characters in my ‘Last Enemy Series’ and prequels. Captain Tommy Williams. He is the one who led the rescue mission to free Commander Jacob Edwards in the third book of that series. He is also Jacob’s mentor. Captain Williams has a label attached to him by his colleagues that he is not very fond of, which is: “The Living Legend”. In the upcoming book I show how he got that label and why he doesn’t like it when people call him that.

The second book is called Magi Apprentice and it is a historical fiction of the wise men who visited the young child Jesus in Bethlehem after his birth.

For more information on Brandy: Ballad of a Pirate Princess, please visit the author's website at danehendrickson.com 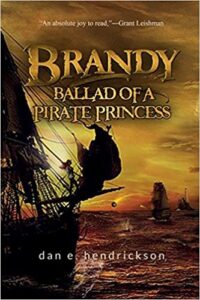