FQ: This was such a fun book. Where did the world of Grady and his friends come from?

ROMAN: My son is an author. He and my younger son were coming up with ideas for a series about a superhero high school. We usually sit together and exchange information to build stories. He decided to go in another direction (Monsters), and I asked if he minded if I took the superhero high school and did something with it. We do that a lot. As a writing family, we kick around plots, storylines, and characters together.

FQ: Speaking of Grady, one of the wonderful things about this group of friends is how relatable these kids are. You mention in your author’s note that Aarush and his challenges came from discussions with your kids. Would you tell us a little about that?

ROMAN: I grew up with specific learning challenges; I couldn't tie my shoes until adulthood, and I couldn't tell time until my thirties; my brother is blind, my son had learning disabilities, and my granddaughter is working through some challenges now. She has apraxia, which means she had to learn to speak differently than anybody else. She also was globally delayed and had to be taught many things that the rest of us take for granted. I admire her dedication to working at it, just like her dad, my son, who learned to read in an unconventional way. I discovered that we all learn at our own pace. Today, my son, the child who had trouble reading, is the successful COO of a worldwide transportation company. Don't underestimate a person because they can't keep up with everybody else. They may see things from a different perspective which brings even more to the table.

FQ: I liked how Grady narrated his own story and the language/dialogue was perfect for a middle school student. How hard did you have to work on that? Did your own kids help you?

ROMAN: No, my kids are 44 and 40 at this point. I just have a good ear for the way people talk. I've always been a good mimic, and I understand thought processes even if I am not walking in their shoes.

FQ: At one point Grady quotes Mahatma Gandhi - “Strength does not come from physical capacity. It comes from an indomitable will.” What a great quote. Would you tell our readers how it fits in with Grady and his friends?

ROMAN: Grady is expected to beat the school bully at arm wrestling. He believes he is doomed to fail. Aarush, his friend has done the research and explains that strength can come from other places. He compares Elwood's strength to a crab experiment he did. The crab had a huge claw but little muscle mass in it. It gave the illusion of great strength. Aarush tried to teach Grady to not only trust himself, but if he had the confidence to look beyond appearance, he had a better chance of winning. It's all about the mindset. If he has the will, he might have the confidence to win.

ROMAN: I haven't started working on the next book, but my mind is swirling around a bit. I'd like to start it much the same way, with that James Bond action scene in the beginning. I usually wait to see what people liked or disliked about the book before I start.

FQ: In your author bio you mention your books about the not-quite-real town of Bulwark, GA. As a fan of these stories, I was excited to see that you’re currently working on an anthology about Bulwark. Would you tell our readers a little about the new book and when it will be published?

ROMAN: I wrote an adult fiction book called Bulwark with a group of indie authors who then took characters out of my story and wove additional books in the anthology. I added two books to the anthology of my favorite characters. I took a minor character and gave him a lovely backstory. It's a paranormal romance, The Knowing. I villainized a reporter in the first and second books and felt guilty about it. I decided she needed a back story, and The Devil and Dayna Dalton was published. I ended up loving her character and the strange twist in the book too. I write these books as Brit Lunden, so they are not confused with my children's collection.

FQ: You have a lot of videos on your website of yourself reading from your books. Have you found them a good way to connect with your readers?

ROMAN: I did them during the pandemic as a way to help keep kids occupied. I have four grandchildren and know many parents were struggling to keep children engaged, so I tried to do as many things as I could.

FQ: Speaking of videos, a lot of authors are camera shy and have trouble doing similar videos. Especially now that there’s a big push for authors to get on TikTok. Do you enjoy creating them? What would you suggest authors who are camera-shy do to get over their hesitations?

ROMAN: I love doing them. I have a professional who edits them. I think it gives readers a connection to the author. I also feel it leaves a footprint on who you really are. During the pandemic, I studied to be a medium. I do Tik Toks as Lady Phyllis as well. The videos make us approachable and human. Once you start doing them, you lose your fear. I've always been an extrovert. I danced on stage and performed in many amateur stage shows. As a teen, I helped narrate a documentary for a major television station. I am currently the CEO of a worldwide corporation, so I'm used to being seen. I've learned not to hide my light. If I took the time to learn or produce something, I want people to see and hear it. I want to share in their joy of it. I also learned that if you don't promote, all your hard work may go unnoticed.

FQ: I love you Big Book of Silly Jokes for Kids (book 1 and 2!). Where do you get your jokes from?

ROMAN: Many of them are older than me, and that's pretty old! I wrote some, collected others, and researched jokes everywhere. I'm proud to say that the first book reached number one on Amazon in March 2020. I am currently putting together a joke book to be released later this month, along with three picture books later this year.

FQ: Is there a genre or topic that you haven’t tackled yet that you are interested in writing about next?

ROMAN: I've written fiction and nonfiction for all ages, romance, adventure, horror, YA, you name it. I've been asked to co-author a children's book on mediumship with a world-famous medium. I'm not afraid of writing anything. I love trying new things. It's a wonderful feeling when someone writes and says, your book, your thoughts helped me through a very tough time. You helped my child deal with a problem. Your book kept me company when I needed it most. Those are the genuine rewards of being an author. 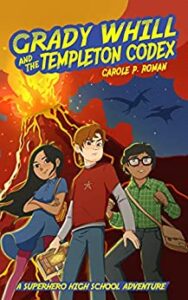