FQ: How much of Barrabas/Kilraven is really B.T. Keaton?

KEATON: Parts of him are very much my Dad, and parts of him are my brother—the two most important men in my life, of course. On the other hand, some of Barrabas is very much “me” and some of him isn’t. At the same time, I didn’t envision him so much as the protagonist of the story, but as someone having crossed paths with some unsavoury characters. So, in a way Barrabas simply ended up being at the wrong place at the wrong time. It’s funny talking about him as if he were a real person! (laughs).

FQ: Has your own world travel and transplantation given you insight into the footloose life of your characters?

KEATON: Wow, that’s an interesting question. I am not sure how to answer it and not sound like a jerk. I suppose if the characters in Transference are footloose, that’s probably because the world’s economic system as we now know it has crashed, which means perceived responsibilities have also changed drastically. Gone are the days of the American Dream, so to speak. As far as insight goes I wouldn’t ever say that I have any leverage over one person or another, however, I would admit that traveling does change you. It’s so good for your soul. On the flipside, I think if you are a traveller it’s partly because you’re constantly looking for something more, whether that’s to fill an internal void, or to find something greater than yourself. And frankly there are things about the world that you simply cannot fully grasp if all you ever do is stay in your hometown. I’m not judging anybody in saying that, it’s more of a remark on my own life. I wish everyone could travel more. Someone needs to invent those transporters in Star Trek so it’s easier for everyone to see the world!

FQ: Are you a student of reincarnation as described in many Eastern religions, since it represents a more etheric kind of “transference”?

KEATON: I’m a student of baloney. (laughs) In truth I don’t know enough about the subject to really talk about it intelligently, but, in my heart, I subscribe to the notion that we all get one life. I certainly don’t want to come back and do it all over again. I mean, could you imagine living forever in this plane of existence? What a nightmare. It’d be like being a vampire...all the people you once loved are gone, and you can only watch as life goes on and times change, while you yourself are fundamentally incapable of making the world better. I think that would be an awful, awful thing. Then again, I can see how another person might find reincarnation enlightening… and I think it could be, if you were able to carry all your knowledge from one life to the next.

FQ: Do you see in our current world the possible development of such elements as the cold domination of Church and the stratification of society as described in Transference?

KEATON: Absolutely. We’re already there in some ways. Look at the innumerable allegations against, let’s call it, “Exhibit A,” and what it’s been accused of with in regards to gross sexual misconduct. That kind of abuse literally damages the soul, and it derails lives forever. On the surface, it seems to me that there’s been no real accountability there, and I’m baffled as to how it continues to thrive. At the other end of the spectrum look at the dangers of militant extremism from “Exhibit B.” It seems painfully clear and quite logical to me that a religion which encourages martyrdom through violence and allows for the destruction of other human beings is in fact not a religion, but rather an archaic sect that does not cherish life, and as such ought to be relegated to a far distant past. All of these things are so shameful and have no place in modern-day society, nor a future one. Fortunately, we still live in an era where there are wonderful people, saints of all faiths, who wish to coexist to achieve what I think we’re all really here for—to help one another.

FQ: Is writing now your primary profession or will you explore other avenues of creativity?

KEATON: No, but I wish it were so! When you’re writing, there’s a zone you get in, and once you’re in it, you don’t want to get out. It’s such a wonderful place to thrive in that even having to stop and do necessary tasks like eating dinner seems irritating (laughs)! So yeah, I find that having a regular “9 to 5” is a detriment to that process. In fact it’s so distracting for me to the point that, more often than not, I’m unable to write. It probably doesn’t help either that the visual representation of my brain, where you to see it, is probably akin to watching a ping pong match.

FQ: Your book, while focusing on a world in which science and religion have both gone awry, is still a hopeful story. Does this beg a sequel in which things veer off again?

KEATON: There was a villain from The Matrix who said hope was “mankind’s greatest strength and simultaneously its greatest weakness.” I love that juxtaposition! When I wrote Transference in 2012-2013, it was intended to be a one-off story and it was far less hopeful than the final product ended up being. So, I’m glad that you said that about hope, because it means that changes made to the book afterward were for the better. Lately I have been toying with the idea of a sequel, and I already know how it would begin… but I don’t have the ending. I think for it to work, yes, it would need to veer off, and to be scarier than the first book. Think T2: Judgement Day. Personally, I would have to feel that whatever I come up with will top the first book, in order to not disappoint myself or the reader...and I’m not quite there yet.

FQ: Who - besides Tolkien - influenced you most in the creation of Transference?

KEATON: I love Tolkien so much, don’t you? Especially The Silmarillion. I could never even come close to pulling off what he did. I mean, he crafted an entire world, with a full backstory, even to the beginning of Time. Amazing! But to answer your question it was mostly a hodgepodge of movies that influenced the book coming to life—Ghostbusters, Return of the Jedi, Dune, Tombstone, to name a few. Ultimately, I wrote the book for my late father, who loved sci-fi books and films. I loved him dearly, and I love him still. I really just wanted to make him proud.

FQ: Do you have plans for the next creative endeavour?

KEATON: Transference was entirely self-published, and it’s been a long and bumpy road. Kinda like life is at times! (laughs). Financially speaking I don’t think I could do this again, at least not for a couple of years, so I have to navigate a way to keep my writing career viable. That said, I’ve got three children’s picture books fully written, and I’m also roughly halfway through a novel about time-travel. (Back To The Future, anyone?) I’m overwhelmed and quite baffled by the response to Transference thus far, so I am hopeful that I can get some of these other projects off the ground in the near future. If all else fails, I can always fall back on my cooking skills. I’ve heard from more than a few people that I make a mean French toast! 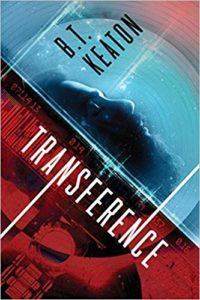