FQ: Have you traveled to or maintained any personal ties to the countries or venues mentioned in your narrative? If so, how did that affect your composition?

VICKERS: Yes, absolutely! I lived in Germany for nine years and England for two. I loved the fact that while researching the Barnum and Bailey Circus I was afforded the opportunity to place Fedor in those locales and have the time frames merry up when the Circus visited them, and fairly close with his lifeline. It was also enjoyable to find that many of the members of the Black Tent (sideshow) were actually German and one of the few things we know about Fedor is that he spoke Russian and German, along with English. So he might have had a connection with fellow German-speaking peers.

FQ: What single piece of advice would you give to a person preparing to read your work with no previous knowledge of your perspective or the historical events described?

VICKERS: Our perspective now is, comparably, incredibly enlightened and still there are so many things most of us don’t understand or times when we have no real empathy in our interactions with people with disabilities. I used to tell mentor students (typical students who volunteer in Special Needs classrooms) that the only thing I want them to understand is that these are actual individuals with feelings and thoughts of their own. I always told them that I wanted them to envision walking through a shopping center or mall, and when they see a person in a wheelchair, obviously with a severe disability, and maybe their child would be frightened or start to avoid that person, they could share and tell them, “It’s okay, it’s just someone who has a disability and there’s no reason to be afraid or need to walk and look the other way.” Remember the fun and even the challenges you had in this class and that they are people. Fedor and his peers had no choice but to use the Circus system to make money and live. Many of them were outcasts and hidden throughout their lives. For all the controversy about the Circus we recognize today, 100 years ago, without medical treatment, social services, or family support, this was how many of these people made a living.

FQ: Have you seen, in your work with special needs individuals, the kind of “hidden intellect” demonstrated in the character of Fedor?

VICKERS: Many times! That was how I started this project in the first place. I was researching different types of disabilities in a Graduate class and discovered a picture of Fedor. I found his photo and one of my students with autism saw his picture on my computer screen. He asked if we could find out more about him. One thing led to another, and here we are. During my almost twenty years as a Special Ed Teacher and Teacher of the Visually Impaired, I realized how many types of “smart” there are in the world. Some of the things my students would say or comprehend made me stop and think that I was privileged to work with some of the most genuine, sweet, and exceptional people in the world. They all had hidden gifts.

FQ: Do you have any recommendations for readers of your book for further study concerning the history and gradual enlightenment of the scientific and social communities to the true worth of special needs individuals?

VICKERS: I wrote my memoir of my first years of teaching (Chucky’s in Tucson) and tried to show how much the students gave me as opposed to how much I gladly did for them. It was the job I was born for and I regret I only had those twenty or so years, as opposed to a lifetime of working with the students, aides (angels here on earth), and other teachers I had the distinct pleasure of working with.

FQ: Do you have a favorite historical character among the ones you depict here?

VICKERS: Yes. I am partial to Mr. Mark Twain, but many of the characters that fell into Fedor’s timeline (as I tried to keep it very close to being possible) were coincidentally some of my most respected writers. Melville, Tolstoy, etc. Many of the conversations Fedor has with some of the characters are how I feel about the authors myself. Mark Twain was actually a fan of the circus and had a tenuous relationship with P.T. Barnum.

FQ: Did your diligent research for this book include any contemporary sources to provide insight into the circus and carnival business as it now exists in America?

VICKERS: The circus was an incredible sub-culture in America for years. Other nations had carnivals and different attractions, but I wanted to capture the magic, enormity, and marvel how it was and how during Fedor’s time it was expanding and evolved from a once-modest endeavor to the Greatest Show on Earth. There weren’t many significant threads or values of American life that the circus didn’t touch, reflect, or reference in some way. I wanted also to contrast the horror of how the animals were treated in past decades. We have completely revamped the circus recently and that progress was inevitable. I never really enjoyed seeing the animals in cages, either in zoos or in the rings of the tents when I was young. There is now a subculture of sideshows, but I only was interested in how Fedor would have lived in that complex multifaceted enterprise.

FQ: Was there a particular writer whose work influenced the structure and scope of your book?

VICKERS: About halfway through the process of outlining the story I realized I owed a great debt of gratitude to Thomas Berger’s Little Big Man. I loved the book when I was young and the movie also. He puts Jack Crabb in many of the same types of situations (but in a much more physical sense) with dozens of historical characters. I didn’t realize it until well into the process, but honesty makes me fess up to the awareness and thankfulness of having read that wonderful book.

FQ: Do you have plans for your next creative endeavor?

VICKERS: I’m already involved in another YA novel about two boys growing up in the late sixties and early seventies in West Los Angeles. Along with the gritty details of the era, they become involved in a paranormal experience in the abandoned movie studio lot. It’s shaping up rather nicely. Thank you for your interest in Fedor! 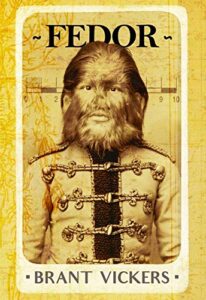