FQ: You use points regarding sainthood as seen within the Catholic Church as integral to the story of “Martin/Martina;” in addition, you have created a leader with 12 followers in “Aftermath,” not unlike Jesus and his disciples. Does this reflect a personal interest in or adherence to Christianity?

WOODWORTH: How very interesting that you should pick up on Christianity in these novellas, especially the point about Jesus and his Disciples. I had no conscious design to insert a religious message into Gender, but having seen St. Giulio in a chapel on the Island of Silence in Lake Orta (Italy), I got the idea of putting Mother Martina in a glass coffin. As for the young Martin/Martina—when I lived in Athens, Greece, I learned about St. Marina, who dressed as a man in order to follow her father into a monastery. Like Martin/Martina, s/he was accused of fathering a child.

Personally, I feel that religion is one of the biggest reasons for division among people, but I don’t explore that issue in these stories. I am not a religious person myself, though I have strong beliefs on morality and ethics. And I pay attention to and respect religions around the world.

FQ: What single piece of advice would you give to a person preparing to read your work with no previous knowledge of your unique formats and storylines?

WOODWORTH: Be ready for some surprises and some gender confusion, and enjoy the rhymes, meters, and free verse. A novella in verse can be read as a narrative with the added focus on language and prosody that isn’t necessarily found in prose.

FQ: Who is your favorite character among the ones you depict here?

WOODWORTH: My favorite character in “Martin/Martina” is, of course, Martin, although Ralou interests me. She is one and the same person in the 11th century and the 21st, always ready to do what needs to be done. I also have a real liking for Father Ralph and his rhymes.

In “Aftermath,” my favorite character is the Weaver, Wroc. She is steadfast, serious, insightful, and always seems to know what to do in a crisis.

FQ: What factors have drawn you to so closely embrace the theme of the two novellas’ combined title?

WOODWORTH: Each novella has an underlying theme of gender. Martin/Martina, for instance, is a female who lives as a male and raises lovingly and willingly the child s/he is accused of fathering. In “Aftermath,” I saw the tripartite community as a sort of beehive with asexual drones, who are the Builders. Builder Tris becomes pregnant, which the Builders find impossible, not to mention criminal.

FQ: Your two novellas have echoes in current significant socio-political issues, especially in the US; are such issues part of what has influenced your creations?

WOODWORTH: Yes, I would say that anyone who reads the media in print and online these days would be very much aware of LGBTQIA issues. Neither of my novellas in Gender, however, specifically focuses on any one of these issues. Martina was born female, but for all practical purposes is a male for most of her life. However, she never objected to her status as a female in the glass coffin. I want to make the point that sexual orientation in my mind does not define a human being. I see people as people. Period.

FQ: “Aftermath,” your second novella in this pairing, while based around a world nearly destroyed, is still a hopeful story. Could you envision a sequel in which events veer off again, forcing the new humanity to cope in new ways to prevent disaster?

WOODWORTH: Yes, I think “Aftermath” needs a sequel. Thanks for the encouragement. Tadz has an emerging vision of the future, and perhaps I will develop it for him. I worry that the future is leading right back to materialism, narcissism, and accumulation of wealth.

FQ: “Martin/Martina” presents a strong statement about the cloudiness of physical gender, while positing miracles from the seemingly non-gendered hero/ine. Is it your hope to convey to readers a sense of positive qualities inherent in gender mixing?

WOODWORTH: As I mentioned previously, I see people as people, irrespective of their sexual orientation. I hope I have conveyed this in “Martin/Martina.” As a male, Martin raised a son. I consider this Martin/Martina’s greatest miracle. Martina’s face appears on a wall, and that too is a miracle, albeit a more conventional miracle than raising a son. (Again in Orta, Italy, Padre Pio’s face appeared on a building, which gave me the idea for this miracle.) When Martina cries real tears in her glass coffin—cries as a woman might—she has sealed her sainthood. Still there is the personal miracle she’s been waiting for when Dino and Bronwyn appear, and he calls her “Papa.”

FQ: Are you planning new creative works based around similar, or perhaps even more intellectually daring, themes?

WOODWORTH: At the present time, I am thinking of a New and Selected Poems, which would be my ninth collection containing some of my poetry from 1978 to 2022.

I don’t know that I would say I have an “intellectually daring” theme to pursue, though I like the idea of a sequel to “Aftermath.”

I am very sympathetic with members of the LGBTQIA community, especially as we hear about same-sex marriage perhaps being struck down. And, of course, there’s all the controversy about trans kids and how much parents can do for them and what bathrooms they can use and all sorts of unfortunate biases stemming from fear and ignorance. I have thought of writing something in the voice of one of these kids, but I don’t know if I could pull it off. To be continued... 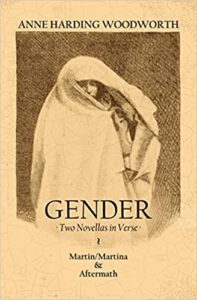