Dr. Matzo is a retired Professor and the Frances E. and A. Earl Ziegler Chair in Palliative Care Nursing from The University of Oklahoma Health Sciences Center College of Nursing in Oklahoma City, Oklahoma. She is a member of the Undergraduate Faculty at the University of Maryland Global Campus. She was awarded a Doctorate in Gerontology from the University of Massachusetts-Boston and a Master’s degree in Nursing from the Gerontological Nurse Practitioner Program at the University of Massachusetts-Lowell. Dr. Matzo is an experienced Hospice nurse, provides continuing education programs related to death, dying, and bereavement internationally, as well as co-authoring (with Deborah Sherman) the first Palliative Care Nursing Textbook published in the United States (now in its Fifth Edition). She is a Fellow of the American Academy of Nursing (FAAN), one of the highest honors afforded nurses.

Dr. Matzo is an experienced researcher and was the principal investigator (PI) on an American Cancer Society-funded research grant entitled “Improving Communication about Sexual Health for Adults Living with Serious Illness.” Dr. Matzo also explored “Oklahomans’ Knowledge, Attitudes, and Behaviors related to Palliative Care,” which was a research project funded by the Hospice Foundation of Oklahoma. She was a Soros Scholar for the Project on Death in America undertaking a project entitled “Undergraduate Nursing Students’ Responses to Death Education.” She was also PI on a study of nurse’s practices of assisted suicide and published a seminal study with Dr. Ezekiel Emanual regarding “Oncology Nurses’ Practices of Assisted Suicide and Patient-Requested Euthanasia in Oncology Nursing Forum. She was also the chief nurse investigator with Dr. Susan Block and Dr. Bob Arnold “Health Care Providers Responses to Their Patient’s Deaths” at Dana Farber Cancer Institute and Harvard Medical School which was funded by the Cummings Foundation which was a qualitative analyses of health care provider’s responses to the death of their patients.

Dr. Matzo has presented educational programs both regionally and nationally on many topics related to Care of the Dying Person, Gerontological Nursing, and Curriculum Development. She has published 80 journal articles and 39 book chapters. Her work has been published in Nurse Practitioner, Nurse Educator, Geriatric Nursing, Nursing Homes, Geriatric Psychiatry, The Journal of Gerontological Nursing, Gerontology and Geriatrics Education, Applied Nursing Research, Heart and Lung, Nursing Education Perspectives, and the Geriatric Clinics of North America. Dr. Matzo is a four-time winner of the American Journal of Nursing Book of the Year award.

Dr. Matzo retired in 2019 and has since started a 501c(3) nonprofit organization that is registered with the Oklahoma Secretary of State with the mission of providing public education regarding serious illness, dying, death, and bereavement with the goal of changing the culture of dying and death in the United States through educational podcasts. Podcasts have been published weekly since April 2020. To date, the organization has enjoyed more than 13,000 podcast downloads and currently has over 10,000 social media followers.

Dr. Matzo currently lives in Oklahoma, and is available for speaking engagements pursuant to her expertise.
Professional VITAE available on request.

Darlene Domanik was born in 1956 and raised in Lincoln Park, a working class suburb of Detroit. Her mother contracted a mysterious infection which did not respond to antibiotics then available. She was repeatedly hospitalized and near death on several occasions. As a result, starting around age 4, for years Darlene and her sister were shuffled between homes of neighbors and aunties within their large Polish family. Darlene actually missed a year of school.

When she attended parochial school, she met Marianne Matzo. They lived a few blocks apart, played together, attended high school together and remained lifetime friends.

Her legal career began at a small firm representing hundreds of plaintiffs hurt by toxic chemicals, against multiple chemical companies. Darlene was appointed chair of a committee organizing all asbestos litigation in Wayne County Circuit Court, creating widely used form documents. She audited classes in toxic exposure and diagnosis at the University of Michigan School of Public Health. After five years, she joined a large firm, Butzel Long, in Detroit. There she built an environmental litigation practice representing industry, cleaning up polluted sites under Superfund. Darlene became a full shareholder, raised two daughters, created a new practice focused on Child Care Facility law, and founded a child care industry group. She became a nationally recognized expert in that field, giving presentations at Annual NAEYC conventions and 4Cs groups across Michigan. She drafted policy handbooks, ran training sessions, and counseled manufacturers on in house child care. She owned and operated two successful child care centers, providing care to a total of 500 children and employing 85 staff members, all while remaining “of Counsel” to her firm.

Darlene left paid work behind in 2000 to care for her elderly parents and a treasured aunt. She served on the board of the Cranbrook Writers’ Guild, obtaining MCACA grants to support their annual Writers’ Conference, and directed that conference. She volunteered at her children’s schools and was elected to the boards of the two condominium associations where she owns homes in Michigan. She has drafted handbooks and policies for both.

Darlene and her husband [an Emergency Physician] of 37 years are devout Catholics. Among many other ministries, her special projects include: child care, a boys’ retreat promoting sexual responsibility, meditation classes [she has studied in India], and vegetarianism/reverence for life.

In 2017, in response to appalling treatment of refugee children at our border and other insanity, Darlene ran for US Congress. She withdrew when the DCCC endorsed Elissa Slotkin, and Darlene became a strong Slotkin supporter. She remains active in politics and received the Michigan Democratic Party’s award in 2018 for outstanding leadership and commitment in USCD8. Her eldest daughter, Lauren Ganapini, is the Executive Director of the Indiana Democratic Party.

Always ready for a good cause, Darlene was honored to help Marianne create Everyone Dies (And Yes, It’s Normal). Darlene wrote the story incorporating Marianne’s simple approach, then called upon successful writer-editor- and illustrator-friends to produce this beautiful book. She is presently writing a second version for young readers.

Darlene currently lives in Michigan, and is available for speaking engagements pursuant to her expertise. 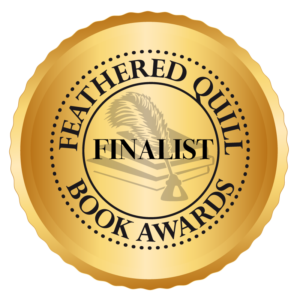 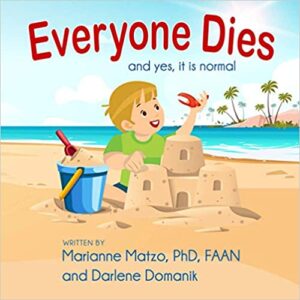 Kenneth J Doka, PhD, Senior Consultant, The Hospice Foundation of America
“Marianne Matzo and Darlene Domanik's children’s book Everyone Dies is a beautiful and sensitive way to introduce the difficult topic of death to children in non-threatening way. Simple yet profound it offers children both understanding and reassurance.”
Dr. Polly Mazanec, RN, Co-Investigator for Cambia Health Foundation grant funded ELNEC Education Project
“Great book for adults to use to explain death to children! This is a wonderfully written and illustrated story helping preschoolers understand that death is a normal part of life. It explores a topic that is sometimes difficult for adults to explain to children through the eyes of a wise grandfather and his grandson. Thank you, Marianne, Darlene, and Kimberly, for writing this- there is nothing else like it available! Much needed!”
Connie Baker, MS, Executive Director, Wong-Baker FACES Foundation
“If you know a child, you need this book.   If you have a child in your life, Everyone Dies should be on your shelf. Perhaps they have yet to experience the death of a pet or loved one, but chances are high they are hearing about the pandemic and wondering if they or someone close to them could get sick and die. Dr. Marianne Matzo and Darlene Domanik has created a delightful story that deals with the reality that Everyone Dies in a way that is honest and straightforward. Children can handle the truth. It will likely dispel some myths they have surrounding death. More importantly, it may help you talk with them about a challenging topic, giving a foundation for other life-changing conversations as they learn about this world in which they live.”
Terrence N. Davidson, PhD, Educational Psychology
“It is important that we adults share our feelings about difficult things—including death—with children. This book tells the story of how a little boy’s finding a dead crab on the beach raises questions about death and how his grandfather’s and parents’ answers help him develop a healthy, age-appropriate understanding of the concept. Its language will be easy for a child to understand, and the illustrations amplify its effectiveness. In addition, the story is told without religious references which are not always helpful to a child’s understanding. I highly recommend this book.”