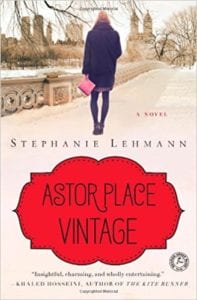 Is it possible for two women to live somewhat parallel lives, feel as though they have met, yet never to have done so because a century of years lay between them? In her debut novel, Astor Place Vintage, Stephanie Lehmann delivers an intriguing story of the lives of these two women and how they were able to connect even though they never met.

On the fifteenth floor of the white brick high-rise on Tenth near Broadway, Amanda Rosenbloom makes her way down the long hallway to meet with Jane Kelly. Barefoot and bearded Rob Kelly welcomes her at the door and escorts her to a tidy nook of a living room before seeking out his grandmother. Jane Kelly may be 98, but she’d yet to receive the memo that addresses how to behave once one reaches such a monumental age in life. Kelly’s first impression of Jane was: ‘this woman hasn’t lost her chutzpah.’ Jane Kelly has cancer and her days are dwindling. As a vintage clothier, Amanda’s job would be to relieve Jane of the myriad of coveted fashions and designs she held onto for decades—pieces ranging from forties and fifties day dresses to snazzy sixties cocktail attire. Rob’s purpose was to assist his Grandmother with the transition and certainly clutter clearing. After an unsuccessful haggling session over price, the two women agree Amanda will take the items on consignment. Besides, it was time for Jane’s nap.

As Amanda begins to sort the items into time periods, she retrieves a fur muffler from the stack and discovers there is something inside. As she reaches inside the muffler, she feels a book—a book that had been sewn into the lining. Pulling the contents through a slight tear, she opens to the first page and sees that the diary belonged to someone named Olive. Curiously drawn to the book and its content, she slips it into her purse before Rob returns. Somewhat conflicted as she had never done anything like this to a client, she still disallows her conscience to force her into retrieving the journal from her purse. When Rob returns, Amanda coordinates a drop off date for the items and leaves for her next appointment.

Olive Westcott is a strapping, young, forward thinking woman. After the sudden and tragic death of her father in 1907, she leaves Cold Spring for Manhattan. Even though Aunt Ida was the only ‘mother’ Olive ever knew since her real mother died giving birth to Olive, she knew Aunt Ida would be fine in Cold Spring. Besides, Olive has drive and determination. She is going to have a career as a department store buyer, yet Victorian times emphatically disagreed with Olive’s aspirations. To the contrary, a woman’s role at the turn of the century was to find a suitable husband and get busy with the only career back then: have children, tend to the home and take care of your man. In some respects, she could blame her father for her wanderlust. He was a successful businessman with the Woolworth Co. and when she was younger, she worked in the store he managed. Of course she did the work for no pay because it simply wasn’t proper to pay a woman for her work.

What Amanda doesn’t realize and Olive will never know is Jane Kelly and Olive’s journal will unlock the connection between these two women before it is Jane’s time to pass.

Quill says: Astor Place Vintage is not only a delicious contrast of the turn of the century past and modern day grandeur, but a glorious homage to the Big Apple as well.