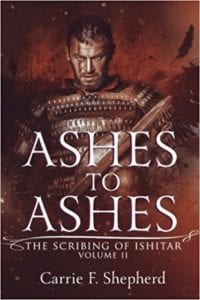 In Volume 1 of this amazingly interesting and fun series, fans were first introduced to Ishitar. This is a character who certainly came into the world at the wrong time, since a tremendous war was gearing up between two gods. These gods, of course, were the big guns who ruled over the realms of Heaven and Hell.

Taking modern-day debates into this fantastical world, the author was able to show readers the difference between a society that was controlled and one that was working diligently in order to bring about freedom for all. Ishitar learned a great deal from that tale, as antagonists came out of the woodwork and ended up proving to Ishitar that what was going on around him was no game.

This is the setup leading into this even more exciting Book 2. Beginning in a very calm manner, readers sit by the side of Charles Hamilton. This is a man who has a great deal on his mind, since he just discovered a ‘gift’ left in a safety deposit box that he visits once a month. The box, usually empty, was filled this time around with a strange sort of puzzle box that another man who was on the scene referred to as an ‘incredible archaeological find’ (cue Indiana Jones music).

Solving the puzzle together, the men looked into the box and found a book that had been missing forever. Although the other man truly wanted to study it, Charles walked away. And the symbols, history, and danger that comes with the tome make up a twisted tale that reader’s will not believe.

The basic premise wraps around Iykva, who is a demon that was sent down in order to create a new race of mortals. Exiled, angry - Iykva comes to the conclusion that the only way for his people and the angels who were exiled to be equal in each others’ eyes is to bring about War.

Ishitar, this time around, is working to put a person on his father’s throne. He is sick of the game his parents play with each other; they do not have any feeling, apparently, for the lives that are lost simply because each one of them must be the top god on the food chain.

As hellish webs and divine puzzles intertwine, readers will once again find themselves taken on a ride of mythical proportions that has this particular reader practically panting for Volume #3.

Quill says: If you have not jumped aboard the Ishitar train, do it now and hold on for the coolest ride of your life.