As We Forgive (DVD) 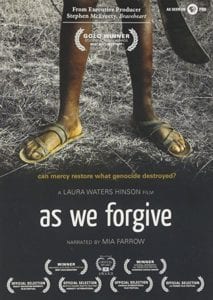 As We Forgive (DVD)

Almost a million people brutally met their deaths at the hands of their neighbors. The Hutus, in their political frenzy, attacked the Tutsis and moderate Hutus, in an unforgettable manner, a nightmare that is relived in the minds of millions around the world to this day. The numbers are sometimes quoted in somewhat lower or significantly higher figures, but genocide is genocide no matter which way you look at it. Rwandans attacked their friends with machetes, shot or pummeled them mercilessly. This extremely powerful, haunting and gripping film, narrated by Mia Farrow, watches these people trying to come to grips with tragedy and make attempts at reconciliation. Could any of us forgive someone who murdered our spouse, children or parents in cold blood?

Over a decade later the tears still fall, the anger and resentment still lingers in the air. Rwandan President Paul Kagame released the perpetrators “who had confessed to their crimes.” The killers would now be living amongst the very people they, in some instances, had tried to kill. The scars lingered in their minds, but women like Rosaria openly show their machete scars to the filmakers. They are deep, horrifying reminders of genocide. An almost nonchalant, shell shocked voice echos a reminder: “If they tell you a murderer has been released in the neighborhood, how would you feel? And this time [they] weren’t releasing one, [they] were releasing forty-thousand.” The perpetrators would be meeting the relatives of their victims in this moving film.

We meet Rosaria whose husband and four children were slaughtered. A man name Saveri killed her sister and all her children. He was terrified to leave prison and meet this woman who not only lost her family but was “facing famine and hunger.” She did have some solace, a child in her womb who was born after the war. She named her Cadeaux, French for “gift,” her only reminder of her husband and children. Would she be able to forgive Saveri? John, another man released by President Kagame, was unsettled as well. His nervous tics spoke to the camera as well as his voice. “I did not believe there could be deliverance for me.” He would go to meet Chantale who lost thirty family members. The tears were quick to rise to the surface. John had killed her father and claimed he “felt like an animal.” Would she be able to forgive John? And then we meet Joy Muana who was a mere seven-year-old when her father was “killed by the rebels.” She lived at Sonrise School with many other orphans of the genocide. She would never meet her father’s killer. Would she grow up to be a forgiving woman or would she hold resentment in her heart? Would this reconciliation process heal the Rwandese or reopen very sore wounds?

It is heartrending to watch “two women struggling to find the answer,” and it was difficult for me not to break into tears watching Chantale struggle with her memories after more than a decade. When I listened to Mia Farrow talk one could almost say her voice is too weak to be a narrator for such a film, but I could hear a voice of power and commitment shining through. Chantale said “What’s inside me will never go away.”

“No snowflake in an avalanche ever feels responsible.” – Voltaire

Quill says: When you watch this film, you will lose a little part of yourself, but the memory of these men and women will never go away either.

For more information on As We Forgive, please visit the website: Living Bricks Campaign or As We Forgive - The Movie