As Bright As Heaven 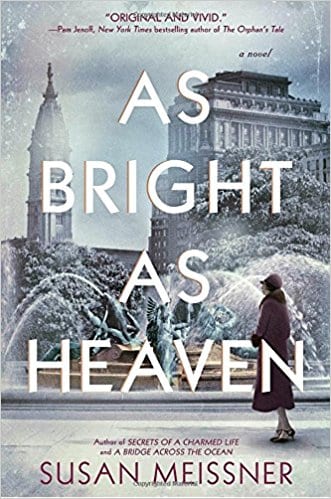 As Bright As Heaven

The year is 1918 and the place is Philadelphia. Susan Meissner delivers a compelling and bittersweet story in her latest novel, As Bright as Heaven.

Thomas and Pauline Bright wanted nothing more than to give their three girls, Evelyn, Maggie and Willa a better life. After the tragic loss of their sweet baby boy, Henry, it was time for a new beginning. It was time to leave the tobacco farms of Quakertown behind and look toward the new future Fred, Thomas’ brother was offering. It would be a different life for the girls—trading tobacco curing barns for undertaking. Fred Bright has a successful burial business in Philadelphia and wants to turn it all over to his brother Thomas.

Even though her beloved child Henry has died, Pauline resists the notion of moving. However, the more intimate she becomes with the notion of death and the unrelenting hold loss has on her, Pauline realizes she will never be able to bring Henry back. There is nothing left holding her to Quakertown other than her parents and extended family. It is not enough, and she has a revelation that it is time to put the sorrow behind her and focus on the beautiful children she has who are still alive and provide a future for them. The girls have their own reservations. Evelyn (Evie) being the oldest is their logical child. She must maintain a stiff upper lip and convince her younger siblings that life in Philadelphia will be grand. Maggie, on the other hand, is the free spirit. She sees life in a different light and cannot seem to grasp the concept of a better life than the one she already has. Aside from the loss of dear Henry, she believes things will get better. Willa, the baby, simply wants what all youngest siblings want: center stage and constant attention.

Initially, the move from the rural likes of Quakertown to the city streets of Philadelphia are more than foreign and overwhelming. Uncle Fred, Thomas’ brother, never having married has strict designs on what a woman’s place is in the home and far be it for him to acquiesce even a notion of Pauline or the girls ever setting foot in the embalming salon. Time moves forward, and the Great War persists across the sea. When the epic pandemic of the Spanish Flu hits the city streets of Philadelphia and the surrounding communities, the Bright family is about to face greater challenges in their day-to-day battle with survival as their constant reminder of the unknown in the days that lie ahead.

I was instantly captivated with this story. Ms. Meissner set the realities to paper of the pandemic tragedy of the Spanish Flu and assigned the horrors of the havoc it reaped on all its victims. The historical infusion she wove in and around the characters she created was fascinating. This may be a work of historical fiction, but her documentation of what happened to entire communities because of this illness breathed intense credibility throughout this story. It is difficult to fathom the period in this novel is a mere 100 years ago; yet, Ms. Meissner has a wonderful ability to impart several layers of varied emotion for her audience to revel in with the turn of each page. My only regret in reading this novel is that point when I arrived at the last page. A true master of her art, she ties the entire story up into a neat bow at story’s end; leaving her audience with the anticipation of her next novel. Well done Ms. Meissner! I look forward to your next book.

Quill Says: As Bright as Heaven reinforces the tenacity and power of hope and new beginnings.