As All My Fathers Were 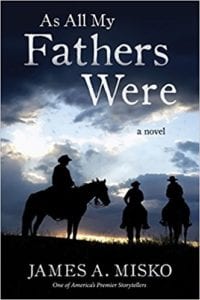 As All My Fathers Were

James A. Misko treats his audience to over-the-top satisfaction in his latest novel, As All My Fathers Were.

Mae Barrett has met her maker and made sure she left a daunting task for her sons Richard and Seth to complete if they planned to continue ownership and operation of the Barrett Ranch. It would seem her grown sons had a thing or two to learn about ranching. They needed to understand not only the critical role the mighty Platte River played in Barrett Ranch’s sustenance and future, but why their great grandfather homesteaded this particular piece of Nebraska generations before. Outlining specific details in her will to the boys, Mae details the conditions of a 61-day trek they must take by horse and canoe along the Platte. This journey isn’t simply an outing for the men to explore the landscape and camp as cowboys had generations before them. Rather, they are to observe the implications of industrial farming and its fierce impact it is having on the land, air and water that surrounds them.

Unfortunately this isn’t the only challenge Richard and Seth have to overcome. Their wealthy neighbor, Klete Dixon, has coveted Barrett Ranch for many years. With Mae Barrett finally out of the way, the prospect of combining Barrett Ranch’s 6000+ acres with his existing 8000+ parcel is low hanging fruit he plans to pick. Klete Dixon gets giddy when he thinks about the possibility of not only continuing his reign as the wealthiest farmer in Plattesville, Nebraska, but soon he will be the largest landowner as well at the expense of Richard and Seth Barrett. When the brothers set out on their quest, it isn’t long before their party of two increases. Ninety-year-old Filoh Smith has his own agenda for joining forces with Richard and Seth. Like it or not, Filoh plans to provide an eye-opening education to the ‘boys.’ It’s time to impress the importance of redirecting their thinking as to just exactly how farming can be done with more than a touch of knowledge and respect for the land that has yielded their good fortune for many years.

James Misko turns words into magical storytelling as he does a deep dive in the development of his Barrett brother characters. They are genuine and credible as much as they are opposites who work beautifully together. With the supporting foundation of the brothers’ legacy ranch I found myself often remembering another equally iconic cowboy story: Lonesome Dove by Larry McMurtry. I was immediately consumed by this magnificent tale. While Richard and Seth Barrett may not be Gus McCrae and Captain Woodrow Call, their light and fire burns strong thanks to the constant life Misko breathed into each brother across the 400+ pages of As All My Fathers Were. There is an interesting application Misko uses to break scenes as he transitions from one chapter to the next. He assigns a voice to the Platte River. Short vignettes are written to chronicle the brothers journey and the messages are sentiments of the years of burden and abuse this river has endured at the hand of man. The reader can feel the sense of soul in the observations the river emotes at these intermittent breaks throughout the book. The dialogue is rich and had me laughing out loud in some places as much as it had me angered given the antics of his villain, Klete Dixon. Indeed Mr. Misko, your superb storytelling exemplifies your enviable writing ability. I can only hope you are penning your next adventure because your fans undoubtedly crave another!

Quill says: Saddle up your doggies and ride the trail of As All My Fathers Were. It’s a page turning legacy that will be difficult to set aside until the last page is consumed!

For more information on As All My Fathers Were, please visit the author's website at: www.jimmisko.com