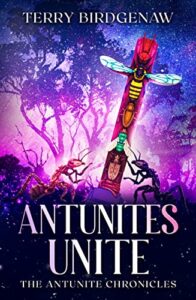 Many generations ago, Bilaluna was a multi-insectoid moon ruled by Queen Beelieve. Everything was harmonious among the seven cyborg insect families - ANTs, BEEs, BUGs, FLYs, RoAChs, WoBBs, and WoRMs - that lived on it. Everyone had a role to play; no race was proclaimed to be above others and everyone was just happy doing their part for their own lives, the lives of others, their Queen, and their moon.

During that time, Queen Beelieve was busy preparing to once again inhabit the planet Poo-ponic. After being destroyed by a climate catastrophe, the Queen Bee thought it was ready to sustain life again. They would send a part of the population there, making sure there were equal numbers among the seven insectoid families so the planet and the system would be in balance. Intopia, the new name for Poo-ponic, would be an extension of Bilaluna; it would have the same rules, the same form of government, and most importantly, the same peace.

For three generations, that said peace was kept and the system was perfectly in place until Rustant, an arrogant ANT who believes ANTs should lead the pack, came back from his student trip from Earth. Antebon, a black ANT, was on the same trip with Rustant, but it seemed like they took home different learnings. Once back at Intopia, Rustant was so adamant that ANTs should be the only insectoid family in Intopia. He’s convinced that by adapting Earth’s technology, most of the other insectoids can be replaced by brown and black ANTs who will be under the rule of the reds. Antebon, on the other hand, was amazed by how people of different races and walks of life on Earth work well with each other. People on Earth, like Bilaluna and Intopia, are utilizing technology to keep improving their lives.

This simple difference started out as a discourse between the two students which led to Rustant and Antebon running against each other for the presidency and future of Intopia. Rustant was a dedicated and cunning brainwasher so he won the election. After becoming president, he made sure his dictatorship was just as he had imagined - red ANTs above everything else, brown and black ANTs’ intelligence controlled and becoming slaves, and most of the other insectoid families wiped away. Intopia was renamed Antalonia on Rustant’s reign and he swore it would never return to the barbaric ways of Bilaluna.

Back on Bilaluna, all of Queen Beeutee’s (the current queen and great granddaughter of Queen Beelieve) plans to infiltrate Antalonia failed. Seems like all hope is lost until Antebon successfully arrives on Bilaluna despite Rustant’s efforts of going after and killing her. Antebon carried something with her that just might turn the tables on Antalonia. But patience and time are needed to bring back Intopia in all its glory.

Antunites Unite is the third and last book in The Antuna Chronicles by Terry Birdgenaw. The copy reviewed says Antuna’s Story, the title of the first book, in every footer so it was a little confusing at first. Although it's the last installment in the trilogy, Antunites Unite can be read as a standalone. There is a sense of humor, child-like wonder, and out-of-this-world entertainment that will pull the readers in right from the start. Birdgenaw has created a beautiful fantasy world slowly but surely. The book is also science fiction in nature, so the terminology would suddenly become technical at times, but it’s not intimidating and is still fun to read. The language is careful in every description and every expression - Birdgenaw made sure that his ant lingo would stick and it did. Even the ANTs names are packed with meanings and picked with intention.

The juxtaposition of past and present, ants’ measurement of time, and their pheromonic communication made reading a challenging experience. Birdgenaw provided a timeline at the start and a glossary at the end, but it’s difficult going back and forth just to check a term, especially if the reader is "in the zone." However, once the reader gets past all of these, it's a smooth ride.

Quill says: Antunites Unite is a satire that both kids and adults would appreciate and connect with, especially with what’s happening in the world today.