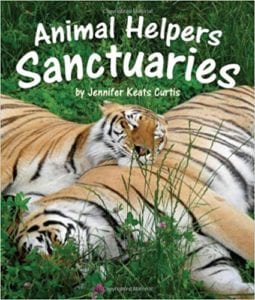 The big tiger moved forward, his eyes focused as if he had spotted his prey, but wait ... is he in the wild? Unfortunately, this tiger may have become a victim of circumstance instead of being able to roam in the wild. These days “some people do own wild animals as pets or as part of a performing act.” Unfortunately, these critters don’t always remain small or hold their charm and people find themselves unable to take care of them. Just what will happen to those lions, tigers, bears and other wild animals who find themselves in this predicament? Fortunately “there are sanctuaries, rescue zoos, and even care farms” where they can go to have their needs met.

Not all states have laws in place to prevent people from obtaining wild and exotic animals as pets. The cute factor quickly goes away as they mature and they “can grow to be large, dangerous, and wild.” Lilly and Titan once found themselves in a serious predicament because they were not only ill, but starving. Fortunately they were taken in by The Wildlife Sanctuary and discovered each other. Kiki, a Canadian lynx, would be unable to take care of herself in the wild because she was declawed and her teeth were filed. When her owner was no longer able to care for her, she found a safe harbor at Safe Haven Rescue Zoo. In this book you’ll meet many other animals who have been rescued from an assortment of circumstances and have now found forever homes.

This is an amazing story of wild rescue animals who have found forever homes in sanctuaries. This is a “photo journal” of several different animals who have found themselves in a predicament not of their own making. Unfortunately, as the book states, these once cute and cuddly animals do grow up and can become a danger to the humans around them. The focus is not only on the animals, but also those who help them. The text is set into full-color, full-page photographic spreads. Newly independent readers can tackle this beginning nonfiction book with a bit of assistance with more difficult words and phrases such as “operant conditioning.” In the back of the book are several activities that can be downloaded and printed from the publisher’s website.

Quill says: The "Animal Helpers" series is a wonderful series that introduces children to both animals and those special people who help them.