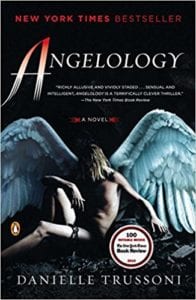 Once Upon a Time (recently, in fact) the literary world was being suffocated by vampires. The personal hope of many was that those particular fantastical characters would slowly fade into that good night and angels would take over in their stead. Thankfully, Viking Penguin has supplied readers with not only a vampire-barren book, but one of the most interesting, compelling, and captivating novels that has been produced in years.

Evangeline is a young nun at St. Rose Convent located in New York State in the Hudson Valley. Every day she walks through the spheres of the Divine, inhaling the air that is thick with incense, and admiring the stunning statues and stained-glass windows that surround her with angels for her morning prayer in the Chapel of Adoration. She was placed in the convent by her father many years ago after her mother was brutally killed, and she’s lived behind the huge wall that separates the worlds of “pure and profane” ever since. Evangeline has a few things in her possession which she has kept hidden over the years, but the one thing she does show to the world is a beautiful golden lyre pin that was once her mother’s.

Most of her days are filled with opening and responding to the mail that arrives at the Convent. She works in a small, chilly room off the library and revels in the calm, normal scheduled workday. This one particular morning, after an evening of strange, eerie dreams, Evangeline opens a letter from a gentleman named Verlaine. He is working for a client who is very interested in discovering correspondence that Abigail Rockefeller had in 1943-44 with Mother Innocenta – Mother Superior of the convent during that time period. Soon Evangeline finds herself embroiled in a historical mystery that she simply cannot turn her back on. Not only does the research lead her into a world where science and religion have split completely apart, but she also begins to find out information regarding her own past – and the line of religious creatures she actually came from.

V.A. Verlaine is a researcher. He spends all his time following clues and putting together information that can help others and earn him even more respect in his chosen field. He believes little in the subject of angels even though the man who has hired him – a man of extreme wealth whose family has for generations been at the top of Manhattan’s food chain – believes wholeheartedly in a mystery surrounding a story mentioned in Genesis that includes fallen angels; The Book of Enoch which relates a past event that literally had angels falling to earth; a location known as The Devil’s Throat; and, a mythological instrument that, for centuries, people have been dying to get their hands on.

When Verlaine and Evangeline team up, other characters arrive on the scene and a literal battle of good versus evil takes place. From Sister Celestine, who has hidden secrets from long ago that the reader gets to witness as they are pulled back in time to Paris, France; where, in the 1940’s, Celestine and Evangeline’s own grandmother, Gabriella, worked side by side on an exploration of mythical proportions, to a time when Gabriella had to become a spy and risked her life so that a secret organization could win a war against demons that couldn’t possibly actually exist – this book has it all.

The writing is beyond superb. The reader will feel every movement and experience every emotion as they walk through Divine light into Gothic darkness by the side of Evangeline. Not to mention, the climax of this story is something readers will never forget and feel the “spell” for many months to come until the equally amazing (I’m confident) sequel, hits the shelves.

Quill says: Passionate storytelling deeply imbedded in a fantastically researched story. This is a book you will honestly never forget. Not only that, the amazing ancient mysteries presented will have you running to Google in order to find out how to become your very own angelologist.