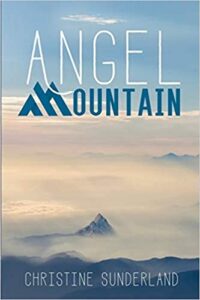 Christine Sunderland delivers a quest for peace and happiness in her latest novel, Angel Mountain.

Destiny plays a vital role in the crossing of paths for each of the characters in this story. Eighty-year-old Abram is a hermit. He lives in the caves of ‘Angel Mountain’ (Mount Diablo), located in the hills of Berkeley, California. He’s had a difficult life beginning with his survival of the Holocaust. His sister Elizabeth is also a Holocaust survivor. Together they managed to survive the horrors of the Hitler regime while hiding in Greece. When their opportunity to flee to America presented itself, they wasted no time in making the journey. Once in America, they have fulfilling teaching careers, convert to Christianity and if it all seemed to be too good to be true, this is more than a cliché sentiment toward the end of their respective lives.

Catherine is a library specialist. She and her colleagues have different points of view and were consistently able to agree to disagree until one day they didn’t. Catherine is the sole person on one side of the latest debate while all her co-workers have taken a stance against her. When she is called into Human Resources, she is advised to change her approach and views. In the heat of the moment, Catherine opts to stay true to her beliefs and resigns.

Dr. Gregory Worthington is a brilliant geneticist and he too is at the headwaters of significant change in his career. In a recent lecture at UC Berkeley (his employer) he elects to broaden his scientific views by including religion into the curriculum. When the University Administration learns of his election to do so, without absolute cause to terminate his employment, they recommend an open-ended leave of absence for the good Doctor. To support their suggestion, the spin is it will provide ample opportunity for him to complete the writing of his book.

Each character is awakened by an Act of Nature in the form of an earthquake. Preceding the earthquake, the Bay Area has been under a thick blanket of smoke and haze from the aftermath of multiple fires. However, the haze seems to sit at the base of Angel Mountain. Elizabeth is worried about her brother Abram. He lives in the caves in the heart of Angel Mountain. It’s his calling and he is bound by his Christian faith to remain there. He believes he is Christ’s conduit to share God’s message of hope and once done, he will be called home to his Heaven. Elizabeth has a strong faith but is more concerned about her brother’s survival from the elements. The first coming together of Abram, Elizabeth and Gregory occurs when Gregory is hiking in the foothills and takes a fall. It is the same day Elizabeth takes a drive to the mountain to check on Abram. Meanwhile, out of work Catherine’s luck is changing when she notices an ad for a librarian to organize an extensive personal library. The library happens to be in Elizabeth’s home. There is one other character who lurks behind the scenes causing mayhem. His name is Malcolm Underhill III. His life’s mission is to create havoc and cause harm to as many good Christians as he can. The day of judgment is rapidly approaching all.

It was a pleasure to read Angel Mountain. There is a common theme that resonates throughout this read: a strong message of faith. Perhaps it’s a bit too cheeky to say how appropriate it is to have a body of work like Angel Mountain in today’s climate, but it is. The depth of character development and the consistent overlay of supporting fact with fictitious characters is uncanny. By no means is this a novel that is the equivalent of a multitude of pulpit pounding moments. Rather, it is a well thought out balance between the clashes of good and evil which, in my opinion, is something every human encounters often throughout his or her life. Ms. Sunderland has documented her use of fact with solid endnotes. She also includes an "Author’s Notes" section to not only render her view on what ‘Heaven’ and its many metaphors represent; again, documenting the research she did to formulate such notes with the sources she referenced in doing so. Angel Mountain is a complex read in many respects as there are bountiful moments for pause and reflection. I commend Ms. Sunderland for staying true to her pen and delivering such a compelling read.

Quill says: Angel Mountain is a body of work that delivers a well-seated message of hope and peace in some uncharted waters in today’s tumultuous world.

For more information on Angel Mountain, please visit the author's website at: www.ChristineSunderland.com