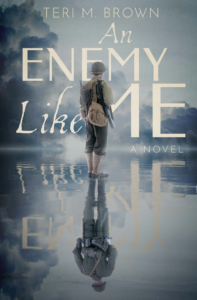 Teri M. Brown’s latest novel, An Enemy Like Me, is a beautifully layered book that delves into the complexities of war and the affects it has on those who have an intense love of country, family, and one’s heritage.

Jacob Miller is a first-generation German American who grew up in New Berlin, Ohio, a small town where many German immigrants settled. It is the Great Depression and like many others, he has no choice but to endure the day-to-day perils of this iconic time in American history. Life is not easy, but Jacob maintains his faith that eventually he will have his happily ever after. When his friend is sent to an internment camp for enemy combatants, the war overseas weighs heavily on Jacob and he is faced with a life-changing choice to make. With the blatant animosity toward Germans, Jacob is determined to demonstrate his allegiance to America and enlists with the promise to his beloved wife Bonnie and their four-year-old son, William, that he will return.

Fast forward to the fall of 1938 - Bonnie reflects on her privilege as a child and "...if ever a child was born with the proverbial silver spoon in her mouth, it was Bonnie..." Her father Carl was a successful engineer and spent a fair amount of time in his early years designing products most Americans needed (or perhaps wanted). When the opportunity presented itself, Carl ventured out on his own and landed in the automobile industry in Detroit, Michigan where he designed new and coveted versions of the automobile. They lived in a strapping mansion near the water where their 65-foot yacht was moored. Unfortunately, the stock market was about to crash and its aftermath work take Bonnie’s privilege along with it. Forced to make drastic changes, Carl accepts a job with the Hoover Company in Canton, Ohio. When Bonnie’s father is presented with a new opportunity in Connecticut, Bonnie decides to remain in Canton. Little did Bonnie know her future would be with Jacob Miller, and their union would be the start of the next generation of Millers.

Ms. Brown is the quintessential baker when it comes to creating delicious layers of filling for great story content! The epic periods in history that transcend from beginning to end in this book make this an exceptionally captivating read. Ms. Brown is quite adept at weaving a believable tale among the nuances of the historic Great Depression and the war in Europe. Her characters have depth and the flow from one chapter to the next is seamless. She has a wonderful gift of setting scenes and providing each character with his/her well-deserved spotlight and while there is a fair amount of back and forth between one period of time to the next, it ties beautifully and effortlessly for the reader to follow the storyline with ease. It didn’t occur to me until I was reading this book that I had read a previous title by Ms. Brown (Sunflowers Beneath the Snow); a fantastic read as well. Well done, Ms. Brown! I look forward to your next book.

Quill Says: An Enemy Like Me is a tremendous read that showcases the indelible mark the many facets and effects war leaves on the human spirit.