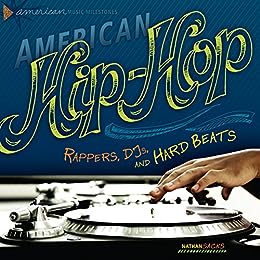 They were dancing in the streets of the Bronx “where a group of DJs (disc jockeys) forged the sound that changed music forever.” Hip-hop was born, but in the 1970s it was not a form of music that was embraced by the masses, not until commercial production began. Although not the first group to record, old school hip-hop group, the Sugarhill Gang, had a hit with “Rapper’s Delight.” It would be a long journey out of the Bronx, but in time this music genre would garner the respect it deserved. It wasn’t long before “hip-hop became a group of traditions, styles, and attitudes” that formed its own culture. DJ Afrika Bambaataa claims that hip-hop has four basic elements: breaking, tagging, DJing, and emceeing, all of which are discussed in this book.

Hip-hop fans are well aware that historically the basic themes include “poverty, drug addiction, joblessness, single motherhood, and rage at racial discrimination and injustice.” DJ Kool Herc (Clive Campbell) was instrumental in honing the hip-hop style and young men like Grandmaster Flash added not only rap, but also “scratching” and “whooshing” to the tracks. The Bronx was alive with music, but the diversification of hip-hop would come when artists became more creative and record companies took notice. In 1970 Kurtis Blow “became the first rapper to sign with a major label.” It was a start. The Furious Five, Bambaataa, and the Treacherous Three were some of the first to record.

Mainstream radio stations wanted no part of this crazy music, but then strange things began to happen. Michael Jackson broke into MTV and Blondie’s Debbie Harry released “Rapture.” It looked like hip-hop was sending out a message and that was that people everywhere wanted to hear it. New school hip-hop had arrived as Russell Simmons began to promote artists and groups. Run-D.M.C. had a “tough but radio-friendly sound” and went worldwide with their sound. The Beastie Boys weren’t considered to be particularly good rappers, they were white, and were destined to fail. Not. They too became a phenomenon in the genre. Women also began to make inroads into hip-hop as producers, emcees, and rappers. It appeared that the sky was the limit.

LL Cool J, Rakim, Richard “Slick Rick” Waters, Boogie Down, Productions, Big Daddy Kane, Marley Marl, Schoolly D, and others stepped forward to put their unique brand on hip-hop. Like all music genres, hip-hop had its golden age, one that “was a period of intense creativity” that was set between the years of 1987 and 1993. The West coast chimed in with their own brand and intense rivalry between coasts was not only vocal, but in certain instances, lethal. Tupac Shakur and Biggie Smalls (the Notorious B.I.G) were murdered. In this book you’ll also read about the voices of the 1980s, 1990s, hip-hop hippies, California hip-hop, groups playing to the mainstream, the debate about the “n-word,” female emcees, the digital movement, and you’ll learn many interesting facts about the fabulous world of hip-hop.

This is a fabulous overview of the world of hip-hop: the history, the artists, the music and more. Naturally in a book such as this one you can’t be all-inclusive. For example, many people who are Lil Wayne fans do know that his smash hit “Lollipop” cut in 2008 has now sold over nine million copies (all forms). Similarly Pitbull’s (Armando Pérez) “Give Me Everything” has made history in the digital realm with its sales. Young readers will be awed as they pass through time meeting the artists and learning about their place in history. The layout is exciting with photographs, sidebars, and “Must Download” playlists. For example, in one sidebar we learn about Lauryn Hill, her rise to fame, and mysterious withdrawal from hip-hop. In the back of the book is an index, a glossary, a timeline (1973 to 2012), a section of “Mini Bios,” “Hip-Hop Must-Haves,” major awards, source notes, a selected bibliography, and additional book, film, and website resources to explore.

Quill says: This is one in the "American Music Milestones" series that will awe the young fans of hip-hop and rap!