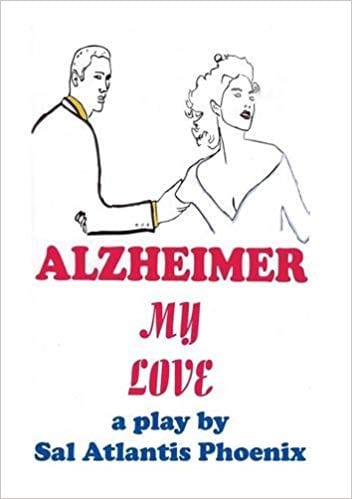 Mary and Joseph are a loving couple...for the most part. They have gone through strife, made mistakes, experienced joys, yet now they are living in their own separate worlds while dealing with the same tragedy.

Mary has Alzheimer’s, and with each new day she loses just a bit more of herself. In her own mind she sees the world from a different place. Her emotions are biting; the anger that comes from people telling her what she’s “forgetting” and handling her as if she’s a child as the disease takes over, is mounting. Joseph, although trying to understand and attempting to stand by her side in the midst of the turmoil, sees things from a very different perspective. He has a difficult job, because he must find a way to keep the love alive between them while shelving the frustration and annoyance he feels with each passing day.

The playwright sets the scene in the park. In the background there is a view of the Hudson River and the George Washington Bridge. Mary and Joseph sit down on a bench, holding hands and admiring the spring flowers all around. Joseph begins in a lilting tone, happy for the day and wanting to share all of the beauty with his wife. Mary, however, has a darker edge to the horizon. She fights with her own inner turmoil as she listens to Joseph remind her of the fact that this was the bench where they met. He speaks about his rebellious days, dealing with “the establishment,” talks about the recession, conservatives versus liberals, and more.

Mary listens, adding her own short, curt thoughts to the conversation, but mostly just getting angry when Joseph tries to correct her on things, or tell her she is confused. This is a woman who was once strong. She knew who she was and stood firm. Now, in the mindset she is in, the word “confused” is synonymous with “stupid.” She does not want to be taken care of, even though recently she wandered off and got lost. Secrets come to the surface during this conversation; secrets that not only anger Joseph but also break his heart.

With the scene changes come the stages of Alzheimer’s and the emotional exhaustion that grows heavier. What also comes is a man by the name of Doctor Allen. This is a man who Joseph despises, even though Allen is Mary’s doctor and tries to help her in ways Joseph simply cannot. Joseph and Allen have plenty of face-offs; they go head to head on various subjects, like the mighty egos of doctors and the medical industry that, in Joseph’s mind, cares about money and nothing else. He throws barbs and accusations at Allen about doctors giving out medications that not only hurt a patient like Mary but make her situation even worse. A nurse/caregiver for Mary is also in this story. Her name is Judy, and she will play a pivotal role when the epic ending comes along and the lights go dim. The final act will leave you breathless, but the journey leading up to it will be even greater.

Millions out there know, unfortunately, the patience-testing disease of Alzheimer’s and how it can cause a family to crumble. The person who suffers from it is in pain. Memories, which are important, fade. Sometimes the past is vivid and the present makes no sense. Some days, it is the other way around. For the person watching this occur, the stress is monumental. One of the most difficult things in the world is to watch one of the strongest people you have ever known disappear before your very eyes. And the day that you are asked: “What is your name?” or “Who are you?” by a person who has known you for decades is a moment in time that literally breaks your heart. The playwright has done a stellar job taking on this subject. Although Joseph and Allen can at times grate on the nerves, standing upon their exalted pulpits and screaming their beliefs, that’s the point. The brain is a frightening thing, and the emotions felt can overwhelm a person enough where disaster is the only way for things to end.

Quill says: Bringing to light the dangerous, the gritty, and the kind, this play surprises and teaches at the same time.