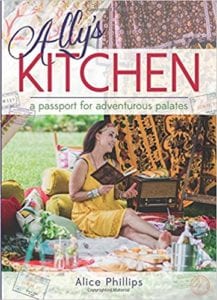 I’ve most certainly been an adventurous person during my lifetime, with a passport to match. In the kitchen, I must admit I’m rather lacking in the “adventure” line when it comes to trying out new recipes. I have more or less colored within the lines so to speak, but Ally’s Kitchenhas made me look beyond the rather bland cooking of my youth...way beyond. When I’ve traveled I have enjoyed trying many new dishes, but never experimented with them on my own. When I first began taking a look at this cookbook it was almost as if I were taking a peek into kitchens around the world.

In fact, I enjoyed reading about the foods, their origins, and even how Alice “Ally” Phillips savors them as much as I loved sampling them. Armchair travelers will more than welcome the worldwide adventure as well as the foods. Each section is prefaced by a personal, almost lyrical introduction to the area as well as personal vignettes. What’s really amazing is the awe Ally feels for each recipe, something I could immediately sense as I read those vignettes! Each recipe is prefaced by a story and has a “Style Maker” at the bottom to round it out. For example, the Jerusalem eggs recipe “looks really cool served in wooden bowls” because “Somehow a ‘common’ serving piece makes this once-forbidden treat even more tasty now that we can all enjoy it.”

As I worked my way through the book I peppered it with Post-It Notes marking my favorites or those adventures I wanted to try. One everyday recipe I loved was the “Dead Sea Spiced Granola & Granola Bars.” Not so exotic, but great tasting and fun to make. One can opt to make one or the other, but I decided to go for the granola, which can be set aside to make granola bars at a later time. No chance because it was great to eat a bit at a time, tossed in my oatmeal, as well as a great addition to my yogurt. Many of the ingredients are standard granola fare, but also included are Chinese 5-spice that gives it that flare (maple syrup too!) and cacao nibs. Needless to say, the granola wasn’t exotic, but was delicious.

One other recipe I ended up loving were the unfamiliar “Down Under Anzac Biscuits.” The photograph made it one of those I-just-have-to-try-it recipes for me. Although one can garnish these biscuits, I loved them as they were. Old-fashioned oats, coconut, honey...well, they just had to be made. This particular recipe was in the “Side Trip Escapades” section. There are several main sections that include European, Mediterranean, Middle Easter, African, Asian, Caribbean, and a smattering of other foods. My favorite section was the Asia section as I’m a fan of Asian food, but those Post-Its have marked several other recipes.

Ally’s Kitchen is most certainly a cookbook for the person who loves to experiment with a wide variety of foods. The more I read, browsed, and experimented, the more the book struck me as a food travelogue as well as a cookbook. It reminded me of foodie Anthony Bourdain...it was that good. I certainly enjoyed traveling with Ally around the world. The book popped with alluring photographs, those fabulous vignettes, and recipes. If you’re not adventurous in the kitchen, you’ll certainly want to be after you try a couple of recipes and browse the others. Fabulous cookbook for the foodie who loves adventure!

Quill says: If you’re a foodie who loves adventure, Ally’s Kitchen is one cookbook that you’ll just have to put on your kitchen shelf!