All You Desire (The Eternal Ones, Book II) 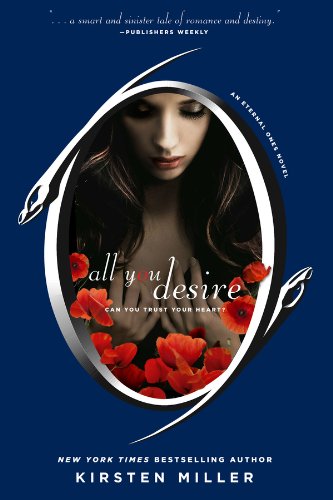 All You Desire (The Eternal Ones, Book II)

The Eternal Ones began with an absolutely incredible story introducing readers to the “mystery” of multiple reincarnations, and people who simply can’t let go of their past lives. As they live each life, they desperately attempt to alter events in order to one day succeed at love, greed, or power - whatever they happen to crave - in a future life. This series “wraps” around Haven Moore, a high school senior who has had visions of previous lives. Not only does she have that as a constant problem, but she also has a strict, religious grandmother/guardian who insists that Haven is possessed by demons.

In this new book, the author continues Haven’s story with a flourish. Haven found her eternal love in a boy named Iain Morrow, who was her past lover in her past lives. She also discovered the Ouroboros Society that is chock full of people like herself, but each and every one carries with them some extremely dark secrets. It was at this Society where Haven found Adam Rosier, the man who searches for her in each life (he’s also kept six of her bodies…the girls she used to be.) When Haven’s beloved Iain fakes his own death to keep them safe, they flee to Rome to live out their life together.

Now, a year later, Haven and Iain are living happily together in Rome, but happiness turns sour rather quickly. Haven’s best friend, Beau Decker, disappears. He’d gone to New York on a search for his past lover only to turn up missing. Not wanting to, but knowing she has to, Haven and Iain return to the States in the hopes of finding Beau. But returning to NYC also means returning to the Ouroboros Society and its leader, Adam.

Along the way, Haven discovers a group of sisters called the Horae, whose goal is to trap Adam and destroy him, and they need Haven’s help. In exchange for helping them lock up Adam, the one in charge of their group will help Haven look into her past life to discover Beau’s lost love in an attempt to find out who might have taken him.

As Haven tries to do their bidding, she soon finds out that Adam is not the same Adam she escaped from a year ago. She can’t let him discover that Iain is still alive, but this Adam’s affections are drawing her in - closer to him then she’s ever been before. Suddenly Haven is torn between love and betrayal; she wants nothing else but to find her friend and leave the Horae and the Society far behind. But the closer she gets to the people surrounding her, the closer she gets to Beau’s abductor. Little does Haven know she’s going to have to risk it all to uncover the real truth behind it all.

The Eternal Ones have, thus far, been an incredible YA series. The story is fresh, the characters offer everything from passion to chills, and the writer does a unique job of “pulling” in readers of all ages.

Quill Says: Just like the first, Book II grabs your attention and keeps it until the very last page. Past lives…adventure…this is a series you don’t want to miss.