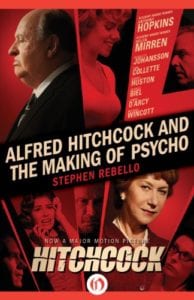 The movie Psycho is credited by many as moving the horror genre beyond the 50s style of silly monster flicks into a truly terrifying genre. Much has been written about the movie as well as its director, Alfred Hitchcock. So the question is, does yet another book need to be written? For fans of Psycho, the answer is a resounding “yes”!

Alfred Hitchcock and the Making of Psycho covers, in depth, everything from Ed Gein, the serial killer Robert Bloch based his best-selling novel on to Hitchcock’s wish to win an Oscar after the movie came out. The pages in-between include the screenplays (there were two), preproduction, shooting, postproduction, publicity and the release. At the back of the book is an overview of Hitchcock’s other films, a note on sources and a bibliography.

For fans of the movie, the question might be, is there anything new in this book? There are the usual topics, which true Hitchcock fans will likely already know, such as the director’s fixation with Vera Miles, his wish to develop her into his next Grace Kelly, the actresses reluctance to be molded by Hitchcock and his eventual disappointment when Miles had the nerve to get pregnant for a third time (Miles, too, had grown weary of Hitchcock’s constant attention,). But there’s also a lot of information on other aspects of the movie, such as why there were two screenplays, how/why the first writer, James P. Cavanagh, was hired and then fired. Do you know how the movie differs from the book? You will after reading Rebello’s text. There are also many gems about the actual making of the movie such as the various voices of "Mother," the Hitchcock-Bass controversy regarding who directed the shower scene, the two slightly different endings and the text for the movie trailer.

The author’s writing style is clean and succinct and makes for a good read. There are a plethora of quotes from the actual people involved in the project, some interviewed for this book, others’ quotes taken from previous publications (since many of the people originally involved have passed away). Some books that are infused with so many quotes are dry and dull, but Rebello, with his easy-reading style, manages to pull off a book that is quick reading and fun. In short, there was an exhaustive amount of research that went into this book and it’s nice to have all the information on Hitchcock and Psycho in one handy reference.

Quill says: For Psycho fans, and those with just a passing curiosity about the master of suspense, Alfred Hitchcock and the Making of Psycho is a fun and educational read.