After A While Crocodile: Alexa’s Diary 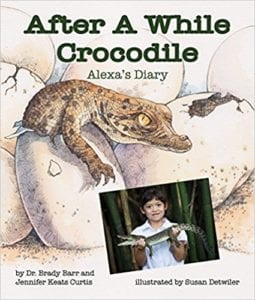 After A While Crocodile: Alexa’s Diary

Alexa is a young girl who lives in Costa Rica and is involved with a very important project at her school. The American crocodile is endangered in Costa Rica and she and her schoolmates are raising baby crocs so that they can be released into the wild. After A While Crocodilefollows Alexa as she raises her crocodile.

Written in the form of a diary, Alexa introduces her readers to Jefe (which means “boss” in Spanish), her little baby crocodile. She describes the noises he makes and what he likes to eat. She also uses numerous Spanish words (with the English translation in parenthesis) – a nice way for kids to learn a few new words. Each entry in the diary shows Jefe a little bigger, a little stronger, and a little closer to his release date. Alexa talks about the American crocodile and the caiman, the two species found in Costa Rica. She talks about how Jefe and his siblings were collected in the wild, the importance of crocodiles in the wild and how and why she takes measurements of her little charge.

After A While Crocodile takes on the important subject of animal conservation and looks at one way an endangered species is being saved. With a nice mix of photos and drawings, the story of Alexa and her little crocodile will draw readers into the world of conservation. At the back of the book are four pages “For Creative Minds” which offers additional information on crocodiles and conservation and is an excellent starting point for those wanting to do additional research.

Quill says: An informative book that explores the process of helping save an endangered species – an excellent addition to the classroom or homeschool library.