Acea and the Animal Kingdom 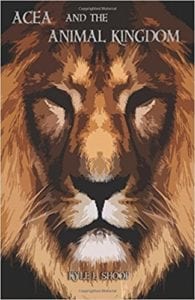 Acea and the Animal Kingdom

There were countless times that twelve-year-old Acea Bishop stood out from the crowd growing up. He was a boy who would rather be in the library than playing sports, or learning about animals rather than running around at recess. His fascination with animals and their different abilities led him to read nearly every animal book in the library and still he wished he could learn more. Perhaps this was a trait he inherited from his father whom he had never known. The only links he has to his father are the stories he is told by his mother, about a brave steadfast man who went on courageous adventures.

One night falling asleep after hearing one of these stories, Acea jolts awake and realizes he has woken up in a strange ancient kingdom. As he looks around getting his bearings he realizes that this must be set up as some sort of zoo, as each door in this circular room is labeled with different habitats that include different animals, for example there is the Safari, Jungle and Aviary. Each door also has a poem written on it and as Acea reads the first poem he realizes that there are puzzles he has to solve in each of the rooms in order to go home.

At first Acea is confused and frustrated wondering why he was chosen and why it was him who needed to be here. Then a large white bird confronts him and starts speaking to him in perfect English. Absolutely in disbelief of what he is hearing the bird, whose name is Emma, explains to him that he has been chosen as the next name on the list to free all of the animals in this kingdom from a wizard’s spell. She says that many names have come before him and failed but she believes with her whole heart that Acea will be the one to break this spell. With the realization of what he must do, Acea takes off into the first room and discovers that his family holds so many more secrets than he ever thought possible.

When I first started reading this book and learned that the protagonist was just twelve, I was curious to see how intense the adventure would be. Sometimes books with characters of this age can go into more of an educational story rather than an adventure and I do admit for me as a reader that those educational 'adventures' are not quite as much fun. However, I was pleasantly surprised to see that author Kyle L. Shoop created not only a thrilling adventure story, but one that includes fantasy and magic. I love to see books for the pre-teen age reader that are gripping, exciting, and at moments cause you to hold your breath and that’s exactly what this book did.

Quill says: An amazing book especially for young readers, as this will have them craving adventure books through their life!