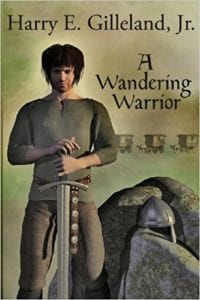 Thomas Beaumont is a man of honor, a man who is “brave, kind, and chivalrous.” A commoner, he is also a trained warrior, a soldier for hire who chooses his battles carefully. Home for Thomas is wherever the road leads him, and in A Wandering Warrior, the path is long, hard, and filled with adventure.

After their parents' death, Thomas and his older brother John were raised by their uncle Gregory. While the man loved his nephews, he was brusque and had no time to love and nurture the boys. Instead, he taught them to fight and by the time they reached adulthood, they were hiring themselves out to fight the battles of noblemen in every realm of twelfth-century England.

In the prologue, we meet Thomas and his uncle Gregory who are fighting together in Gloucestershire while John is fighting for a nobleman in Norfolk. The battles don’t end well for the three men as John is taken captive and then killed by the cruel Simon Mowbray, the High Sheriff of Thetford. Gregory also dies and Thomas is seriously wounded. Thomas manages to escape, learns of his brother’s murder at the hands of the sheriff and begins his quest for revenge.

Thomas soon meets two young women who are being pursued by several of the King’s Royal Guard. The girls lie to Thomas about their true identity, saying they are merely peasants, while the truth, to be learned later in the story, is far more intriguing. Thomas, ever the honorable soldier, makes the decision to protect the fleeing girls. A fight ensues with the advancing soldiers, and Thomas, with his expert training, emerges victor. The frightened girls take a few of the deceased men’s horses and ride off, while Thomas continues his travels. But within a few days while still healing from his wounds, Thomas is attacked by a band of wolves. The brave soldier fights them off as best he can, but his injuries take their toll and he collapses.

When Thomas awakes, he discovers that he has been saved by a band of Travelers. He is nurtured back to health, and soon falls in love with Emalda, the daughter of Cezar, the band’s leader. Still, Thomas must avenge his brother’s death and so, once recovered, he leaves the caravan although both he, and the reader, hope that Emalda and Thomas will meet again.

Thomas continues his quest for revenge and along the way the reader meets many interesting characters. There is romance, with not one but two women, prejudice hiding behind false accusations, deception, plenty of fights, and a handsome hero. There is also a nice blend of historical facts from the training of a knight to the conflicts between noblemen and commoners.

The intrigue of this story is that true to history, the ending was a surprise and it was impossible to predict what end each character would meet. I also particularly enjoyed the touching relationship Thomas, the tough, hard warrior had with “Horse.” While the action started immediately in A Wandering Warrior, it did take a little while to get absorbed into the story because the dialogue was a bit stiff and awkward. It also varied greatly from the commoners’ language (“Ye got a job waitin’ for ye?”) to modern slang (“We gotta surrender…” “Yeah, we kicked their ass”). Overall, however, it was an enjoyable read about a gallant man and his adventures.

Quill says: A fun, easy read for fans of historical fiction who like action and adventure mixed with a little bit of romance.

For more information on A Wandering Warrior, please visit the author's website at: www.gillelands.com/poetry/