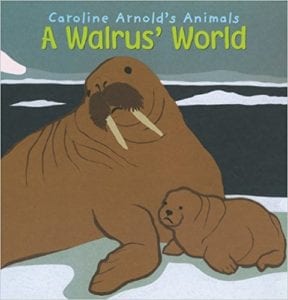 When springtime rolls around in the Arctic, walrus herds begin to move south toward the northern Alaskan coastline to spend the summer. There are "two main groups-Pacific and Atlantic," but this book is about the Pacific group. A walrus herd can consist of a handful of animals or can have "more than 1,000 walruses in it." Somewhere along this journey a female walrus will leave the water and climb "onto an island of floating ice" to give birth to her little baby. This baby, called a calf, is quite large in comparison to a human child and can weigh up to a whopping 160 pounds. The mother will nuzzle and nurse her calf for a few days and then it's time to enter the water. When the calf becomes tired it can easily catch a ride on its mother, who, after a few days, "will join a group of other walrus mothers and their babies."

The foods of choice for a walrus would be things such as ocean shellfish, worms and every now and then a seal. As large as they are, these creatures are not immune from becoming a tasty snack for the polar bear and must remain on the alert. "Awk! Awk!" Sometimes the herd needs to enter the water, not to find food, but to prevent being lunch. Physically the walrus is easy to identify because of their magnificent and unusual tusks, but there are many things this equally magnificent book will teach you. You will learn about their habitat, where they live, what they eat, their physical characteristics, their animal class, their scientific name, how they raise their young, how long they live and many other interesting facts. Did you know that the males of the species actually sing? They do!

This is one in a series of twelve books in the "Caroline Arnold's Animals" series, each one seemingly more impressive than the last. This book was well written and researched and the cut paper collage meshed very nicely with the text. The artwork was particularly appealing and made this massive animal actually look cuddly and quite loveable. I like the way the book wove factual material into the text, which was nicely presented in what I would call a storybook form. This book can be read as a story to children who can readily absorb a lot of information. This would make an excellent read aloud and discuss book in the classroom setting or could easily be used as a stepping stone for a report. There are numerous informative sidebars scattered throughout the book. In the back of the book is a world map that indicates where the walruses live, some "Walrus Fun Facts," an index, a glossary and additional recommended books and internet resources (Fact Hound). This is one interesting book you might want to consider adding to your homeschool or library shelves!

Quill says: This very appealing book holds a wealth of information about the Pacific walrus for the young student! "Awk! Awk!"