A Walk Through the Wilderness: One Man’s Journey from Faith to Fundamentalism to Atheism 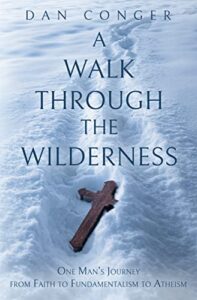 A Walk Through the Wilderness: One Man's Journey from Faith to Fundamentalism to Atheism

Every single human has faith in something; be it a prominent deity, a social construct, or even his own self. Have you ever wondered what kind of life-changing experience it takes to fundamentally change your faith? Let’s find out in A Walk Through the Wilderness: One Man’s Journey from Faith to Fundamentalism to Atheism by Dan Conger.

It was 1995 and Dan, who was an outdoor-loving eighteen-year-old boy raised in a middle-class family, went through a near-death experience while skiing. He had already been raised in a liberal Christian family so he wasn’t a stranger to the Bible but this event led him to the conclusion that the avalanche that almost took his life was not a random accident. He concluded that God gave him salvation as his life was meant for something special. He swore from then on to be a faithful servant of God. He then made a decision to attend a university away from home where, in his solitude and his eagerness to meet other Christians who he could befriend, he stumbled upon a fundamentalist cult that would hold him spellbound throughout a decade of his life.

Dan went through a decade of indoctrination and subservience to the Geftakys Assembly before the cult eventually collapsed. It began with all of the various personal scandals of the founder’s son and it snowballed from there. The cult was doomed and Dan was left with a wife from the cult’s fishbowl marriage, a lifetime of mental and emotional trauma, and a crumbling belief structure. Five years after going through a painful divorce in the middle of getting an MBA while working full-time, Dan eventually met Chanthy and fell in love. The couple desperately wanted to start a family and have a child of their own but fertility issues kept on getting in the way. In the subsequent years, Dan and Chanthy would reassess and redefine how they saw the world and the faith system they believed in.

A Walk Through the Wilderness by Dan Conger is a deeply personal account of one man’s life-changing experience of being ensnared by a fundamentalist cult for a decade and eventually finding purpose and happiness as an atheist husband and father. This story was written as a first-person retrospective narrative with Dan telling us about his past experiences through the lens of his current self. The writing style was casual and conversational which fit the context and point of view of the story. I appreciated the retrospective narrative because it allowed the reader to get a comprehensive commentary from the narrator himself about how his present self views the actions and mindset of his younger self. As a non-religious person myself, I have always wondered how people could get ensnared by cults and this book showed me precisely how. I appreciated the inclusion of racism as a mixed-race couple, the laborious struggles they faced throughout the years of fertility treatments, and the concept that a family is not defined by having a biological child. This book taught me new things and I appreciated that.

Quill says: This is a non-fiction book about a man’s turbulent journey from a decade-long fundamentalist cult indoctrination to a family life of gratitude, triumph over suffering, and atheism.