A Teacher’s Night Before Christmas 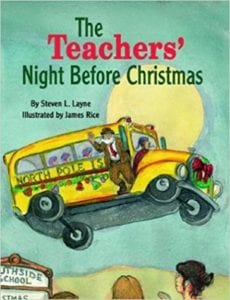 A Teacher’s Night Before Christmas

Everything was set and ready to go at the North Pole the night before Christmas. All the toys for the good boys and girls were in Santa’s sack and Dasher and Dancer were raring to go. Santa was getting ready and “His outfit was striking, / all clean and well pressed, / from the fur on his hat / to the trim on his vest.” He asked an elf to “fetch the list” so he could check all the toys and the names of children who would be receiving them. Of course the elf, who was very surprised, was certain that Santa had already tucked it away in his sack. No, it was not to be found. Not to worry, Santa replied because “A new list my computer / can readily print. / Run along, little elf, or better yet, sprint.” Errrr, what do you do when the hard drive crashes?

That list had been checked twice to find out who’d “been naughty or nice,” but if it was gone that would be a really big problem because naughty children really shouldn’t be rewarded by Santa. Everyone knows they should only get coal in their stockings, but Mrs. Claus had just the answer: “Those wonderful people / who mold the world’s future / can solve any problems-- / I believe they’re called ‘Teacher.’” The reindeer gently closed his eyes and smiled as Mrs. Claus pet his nose. A tiny elf stood on his back, reins in hand, ready to hand them over to Santa so he could begin his journey. Would those teachers be able to tell him who was naughty and nice? Would Mrs. Giles tell him that Tom brought Grandma’s false teeth to Show & Tell? Would Mrs. Jeffers tell him about how Billy kissed all the girls and made them cry? Would they be declared ‘naughty’ and not get any toys?

This is a charming, unique take on Clement Clarke Moore’s, The Night Before Christmas. The verse, which doesn’t miss a beat, presents a new Santa, one who is shone in a more modern light. Santa’s list, which more than likely in the olden days was hand written using the Palmer Method, is now printed out on his new printer (when the hard drive hasn’t crashed that is). The author know that teachers are very special and know who has been naughty or nice and will spill the goods on those who have been less than stellar during the year. This small book has equally modern, charming artwork that will elicit a chuckle now and then. My favorite was when Jane blew up the … well, we’ll let the reader discover whether or not she would be getting any toys. You’ll just have to read the book to find out the answer to that one!

Quill says: This little book would be the perfect gift for that special teacher to read to her classroom during circle or storytime during the holiday season!