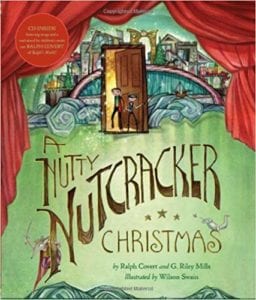 A Nutty Nutcracker Christmas is certainly not your traditional Christmas story! It’s a slightly bizarre, but definitely very funny romp into the world of video games, a journey to ‘Christmas Wood’ where you can eat the trees, and Toy Town.

Fritz Stahlbaum was more interested in playing his video game, Mouse Hunter 5000, than anything else. But when he broke his sister Clara’s nutcracker doll, his beloved video game was taken away. As further punishment, Fritz had to stay home with a boring babysitter while the family went to the Nutcracker ballet. Fritz snuck off to play his video game and soon he reached the practically unreachable level 22. But then something magical – and odd – happened. The evil Mouse King, from the video game, stormed out of Fritz’s closet. The Mouse King was followed by a “real” nutcracker who came to Fritz’s aid.

A Nutty Nutcracker Christmas is an amusing look at one child’s wacky Christmas adventure. It’s funny and quite original and best of all, ends happily. The drawings are eccentric and colorful and to quote the book jacket, the illustrator, Wilson Swain “…took inspiration from holiday cards of the 1960s, store window displays of the 1950s, and cartoon ephemera of the 1940s.”

This book is sold with a CD that includes a retelling of the story, narrated by Ralph Covert, who has written plays, musicals (including the musical this book is based on), and books. He uses just the right mixture of excitement, exaggerated glee, and dread during the narration to keep the story moving quickly. Add the great sound effects and it should be plenty to keep reluctant readers interested and following along with the book. There are also five songs on the CD taken from the musical.