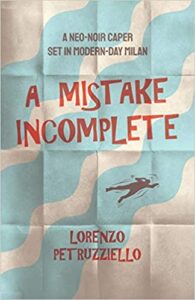 When two old friends and sometime-lovers find one another again in Milan, the outcome could be hopeful, if both were not haunted by ghosts of the past and dangers of the present, in this dynamic dark tale by author Lorenzo Petruzziello.

Why has Stef returned to the Italian city? And why has Beatrice remained there? The two meet in a bar, not surprisingly since that is the ambience that first drew them together. There, in their younger years, they partnered to perpetrate mild cons on rich, unsuspecting tourists. Beatrice was always attracted to Stef, and still is, even though he was never faithful. She still allows men to admire her – for personal gain. He is still willingly engaging in petty theft, but hopes he can regain Beatrice’s interest – at least for a night or two - while she toys with the idea of reigniting what they once shared. But meanwhile, she tends bar and looks for charming men to date and deceive, while he performs criminal acts and enjoys his peripatetic lifestyle.

Once Stef and Beatrice drift back together, though, something strange happens: alone in the bar after hours, they discover a dead man in the bathroom. Knowing they both have just enough of a record to make any investigation point to them if they just call in the cops, they decide to take the sidewinding route: get rid of the body and never speak of it again. But when the dead man comes back to life and starts appearing in their usual hangouts, they know something has gone very, very wrong - something they must deal with together.

The author, who has degrees in International Economics and Marketing, has clearly traveled the international scene he so vividly depicts, showing a special knowledge of exotic food and drink. His book thrives on dialogue, bringing reality to his fascinating cast of cheaters and seducers, and showing his aptitude for several languages - Italian prominently, with smatterings of German and French. The two main characters, Stef and Beatrice, are well drawn, while others like Stef’s overseer Flavio and the mystery man who rose from the dead are also credibly portrayed. The book’s title, A Mistake Incomplete, accurately encapsulates this noir tapestry where nothing will go right, it seems, even when those involved try to do right. The many mysterious elements and the fast pace of the action will keep readers guessing up to the bizarre, unpredicated, climax.

Quill says: A Mistake Incomplete is a venture into a world inhabited by likeably conflicted people doing what comes naturally in their unsavory environment. The many twists and turns with international touches will reward readers of noir fiction and make them wonder what is next from the pen of Petruzziello.

For more information on A Mistake Incomplete, please visit the publisher's website at: www.magnusmade.com