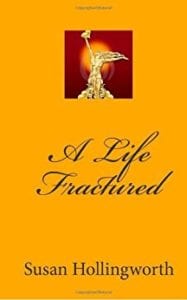 Like a time travel machine behind glass, A Life Fractured deposits the reader in the early 1900s to survey the life of a British aristocrat named Eleanor Gregory. Our observation begins with her exotic and idyllic childhood in colonial India as the young daughter of an army doctor of tropical medicine, and we follow her to Britain and beyond, through two world wars, her life providing a scholarly examination of period life.

Susan Hollingworth based A Life Fractured on a true story, coloring in the tale with historical and cultural specifics. The author clearly has devoted considerable research into many facets of the time periods studied. For instance, as Eleanor and her mother, Rose, ride a train from New York to Los Angeles in the 1940s, the author provides meticulous descriptions of the niceties of the luxury train. “While city lights, shanty dwellings and darkened cornfields flashed by, Rose tucked into a fresh Colorado trout and remarked upon the native American pictographs and geometric shapes of the train’s Mimbreno dinnerware.”

Further enhancing the flavor of the eras Eleanor inhabits, the author provides ample information on the historical context and social cultures of the time. Popular music, theater, radio and television shows, new technology as well as the prevalent figures of the day enhance this historical fiction book. “Over the winter, Eleanor was glad of the distraction as she lost herself in the delights of ‘Kiss Me Kate’ and ‘South Pacific’ at the theatre. Rose was anxious to see how the new government would relieve her of her tax burden, but she had to wait until Chancellor Butler’s first budget to find out. In the meantime, King George died and Elizabeth hurried back from safari in Kenya to take up her duties as Queen.”

Oftentimes, Hollingworth gives readers a personal perspective of life in each era, as if readers were looking over the shoulder of the man on the street, or in this case a wealthy, unmarried British woman. As we follow Eleanor’s life, we learn about the travails of finding good help during the war, the difficulties of living in blacked-out London during the war, and the heavy psychological burden of a woman straining to remain independent. However, at some points A Life Fractured reads as a narrative history book rather than a novel, as the author includes so many historical details and facts that they come at the expense of the story. As a result, readers may struggle to sympathize with sparely drawn characters with whom they have developed so little emotional connection.

Nevertheless, readers interested in British life during the early to mid-1900s will gain much from the time travel trip provided by Susan Hollingworth in A Life Fractured as we are allowed a peek into life during an era long gone.