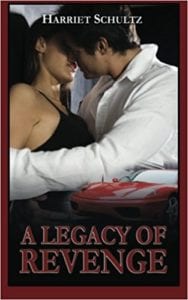 What began in Legacy of the Highlands continues in this new incredible offering. Scottish intrigue, unbelievable passion, mystery, revenge - this one hits on all cylinders - providing a truly thrilling plot that readers will not be able to put down.

For those who do not yet know, Alexandra Cameron is the heroine of this saga. It’s been only two short years since her beloved husband, Will, was slain in the streets of Boston. Getting back on her feet, seeking revenge against the person who ripped her love from her life, Alex did so with the help of Diego Navarro. Diego is a strong, handsome, passionate Argentine who was the rock Alex leaned on after Will’s demise, but he ended up being the man who stole her heart.

Although they deserve happily ever after, Diego has a responsibility in life. His family is incredibly wealthy and has built a real estate empire that Diego will one day be asked to run. After a night of lovemaking, Diego must head back to Buenos Aires leaving Alex to run her gallery in Boston - each wondering how the relationship is going to work.

Alex isn’t alone, of course. A bodyguard by the name of Alain watches over her (a Frenchman who’s just as sexy as Diego). He’s on alert, considering that in a very short time James Mackinnon will be let out of prison in Scotland - a man who has nothing else on his mind but getting revenge on the people who killed his son. And his evil plan begins with Alex.

Serge, Diego’s bodyguard, is also on edge waiting for the Scot to show his face. Sure enough, Mackinnon is released, hale and hearty, and heads to Boston where, despite everything, the kidnapping occurs. Diego, Serge, Alain - literally a brigade of enticing warriors head out to rescue Alex and put an end to this once and for all. But as Alex finds herself tied up in a rustic cabin dealing with a man who looks at her with far more than just revenge in his eyes, she may end up being the one who must fight the battle in order to save her own life.

Quill says: The first book was exhilarating; this one is a heart-pounding adventure that never stops. The Legacy Series is a true gift to readers!