A Land of Big Dreamers: Voices of Courage in America 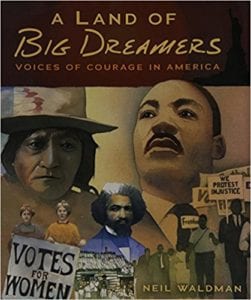 A Land of Big Dreamers: Voices of Courage in America

Thomas Jefferson had hopes that America would indeed be a country that would have a dream. The first words of the Declaration of Independence, “We hold these truths to be self-evident, that all men are created equal …,” were a reflection of his hopes for our new nation, yet that dream would not come to pass, at least not in his lifetime. Others would fight for the right to vote, hold hopes that those who set foot on our shores would be welcome, and demand an end to slavery and the oppression of mankind. Throughout the years, individuals have stepped forth and made their mark on history in an attempt to ensure that Jefferson’s dream would come to pass. Each step they made enabled others to live in peace and comfort in some way that previously had been denied them.

Rosa Parks was a black seamstress who “defied the law by refusing to give up her bus seat to a white passenger.” Her courage and determination began the civil rights movement in 1955. Rosa later maintained, “I would like to be known as a person who is concerned about freedom and equality and justice and prosperity for all people.” Her voice echoed Thomas Jefferson’s sentiment. There were many others who contributed in their own way toward that equality. These pages swirl with their stories as they strived to help others. In this book we hear the voices of Elizabeth Cady Stanton, Frederick Douglass, Sitting Bull, Abraham Lincoln, Emma Lazarus, Franklin D. Roosevelt, John R. Kennedy, Rachel Carson, Dr. Martin Luther King Jr., Cesar Chavez, and Barack Obama.

The words and voices of “thirteen great Americans” echo the dreams of the founding fathers of America. Each portrait is prefaced by a quotation that expresses what the individual believed in and fought for. Students will read a brief biographical sketch on one page and see a visual expression of who the person was. For example, when we learn about Franklin D. Roosevelt, we can see people standing in line for free soup. Beside Franklin is a political pin that expresses the fact that he was “For A New Deal.” The watercolors are very impressive in that they catch a person and moment in history that has changed the tapestry of America forever. In the back of the book is additional information about the “Big Dreamers” and additional source notes students may wish to explore if they want to make a report.

Quill says: This is an excellent overview of American dreamers who stood up for their beliefs, a book that would be an excellent choice for any homeschool, classroom, or library shelf.