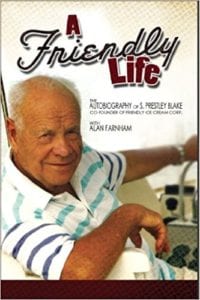 The Fribble, Big Beef Burgers and the Fishamajig – if you’re familiar with these food items, chances are you’ve eaten at a Friendly’s – a popular family chain of restaurants primarily in the northeastern United States. The co-founder of Friendly Ice Cream Corporation, S. Prestley Blake, details how the restaurants got started, its growth, eventual sale, and how, at the age of 86, the author filed a shareholder’s lawsuit against the new owner who he felt was damaging the company.

From the outset, there’s no doubt that S. Prestley Blake is a man who is not afraid to voice his opinion. In the first few pages of his memoir, he recounts the day in 2001 when he stood up at a shareholders annual meeting to challenge the then current CEO of Friendly Ice Cream. Blake wanted to know why the company was drowning in debt and why the CEO was using a private jet to fly around the country. At the time, Blake was a spry 86 years old and had been enjoying retirement when he learned of his beloved company’s problems.

Fast forward a few pages and Blake takes the reader back to the early days of the company he and his brother Curt founded during the Depression. From the $547 his parents invested for their sons in a freezer to sell ice cream, to the 500-chain restaurant empire they built, Blake shares with the reader many interesting facts.

From the growth of Friendly Ice Cream Corp. and its eventual sale, the author next moves on to his retirement years, the places he traveled and the people he met. Finally, near the end of this brief memoir, Blake explains the how and why behind the shareholder revolt he led. So famous and intriguing was the lawsuit Blake filed, that it actually became a case study at Harvard Business School.

As someone who grew up eating at Friendly’s, I was quite interested in reading this memoir and learning the story behind the birth of this popular chain. The tidbits of history, such as how the Fribble got its name, will keep fans of the restaurant turning pages. S. Prestley Blake is not one to mince words and this strong, opinionated voice comes through clearly on the pages of A Friendly Life. Whether it’s offering the reader advice on how to be successful, or what he thought of the corporate jet Friendly’s CEO had, Blake tells it “like it is.”

At just 112 pages, it won’t take long to read this memoir. The author doesn’t go into great detail about the wheeling and dealing behind the scenes and that works well for this book, written for the casual reader interested in Friendly's rather than the business student seeking to garner advice. There are plenty of interesting things Blake shares from his life such as getting advice from J.C. Penny to dealing with a salesman who would eventually become the CEO of McDonald’s (Ray Kroc). There are also 20 pages of pictures that include a shot of the first restaurant, an early menu, a closed until the war is over notice (WWII), and numerous photos of friends through the years.

Quill says: Whether interested specifically in the growth of Friendly Ice Cream Corp. or simply in how a two-brother ice cream store grew into a 500-chain restaurant, this memoir will satisfy.