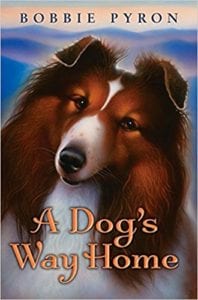 Tam, a Shetland sheepdog, and his young owner Abby Whistler had a remarkable bond. Competing in agility classes, eleven-year-old Abby simply needed to shift her weight or nod her head and her dog would pick up the cue and obey. Tam always understood. The two were an unbeatable team in the competitive world of junior handler dog agility. But more importantly, they loved each other unconditionally. That love and devotion was about to be tested.

It was a long drive home to Harmony Gap, North Carolina from The Southeast Virginia Junior Agility Championship. Abby was riding in the front of the truck with her mama while Tam was sleeping in a crate in the back of the vehicle. As the dog slept off the long trip, he was suddenly jerked awake by the sound of splitting metal, burning rubber, and in seconds, he was tossed about as the truck careened out of control.

Tam and the crate were thrust from the truck and violently tossed down a hill, then tumbled down a small cliff into the rushing water below. As the crate began to sink, the terrified dog struggled to free himself from the rusted metal prison. Breaking free, the rushing current grabbed him and carried him far downstream, away from his beloved Abby.

When Abby recovered and was released from the hospital, she began her search for Tam. She knew the dog was still alive and refused to give up, no matter what the adults around her said. Perhaps it was the dreams she had of Tam, or maybe she inherited the “Sight” from her grandmother, but she knew her dog would somehow come home. Even a move to a new city would not stop the determined girl from looking for Tam.

At the same time, the small Shetland sheepdog needed to survive the wilds of the Blue Ridge Mountains. Exhausted, hungry, and frightened, he had an all-encompassing need to find "home” and his girl. Would he make it?

A Dog’s Way Home is the heartwarming tale of the amazing bond one little dog and a very determined young lady share. While Abby must deal with her parents’ refusal to keep looking for Tam, the lost dog must contend with dangerous wild animals and humans who always seem to confuse him with a fox and shoo him away. This book has a very strong female lead; an excellent role model for young girls. While Abby does have some confrontations with her parents, the author doesn’t dwell on those events. The book also deals with friendships and pre-judging a person based on their income and status at school. It’s a nice lesson for Abby and readers of A Dog’s Way Home on why a person should never be judged based on outward appearances.

The telling of A Dog’s Way Home switches between a first person recounting from Abby’s point of view and a third person narration for chapters that focus on Tam’s adventures. This keeps the story fresh and moving quickly. While there is plenty of adventure, it should be noted for more sensitive readers that the book does detail an animal dying at the hands of a hunter and an older character suffering a heart attack (she lives and recovers). Overall, the book was a thoroughly enjoyable tale of the love between a dog and his young owner.