A Dog’s Purpose: A Novel for Humans 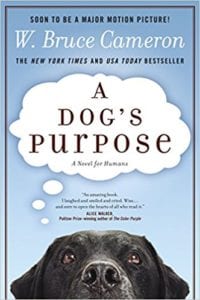 A Dog's Purpose: A Novel for Humans

Dog lovers have always known that dogs are smart, loving animals that are deeply devoted to "their humans." Author W. Bruce Cameron has taken this knowledge and added a unique twist that builds on it - a novel that imagines one dog, who lives several dog lives, and remembers each life, and the lessons learned in that life.

A Dog's Purpose opens with a puppy describing his life. It soon becomes clear that the puppy, along with his three siblings and his mother, are feral. Eventually the puppy, along with his mother and one brother, are captured by a dog rescue. They are placed in a backyard with many other dogs and while the puppy, who is soon named Toby, adjusts well, his mother can't handle the human interaction and manages to escape. Toby grows, makes friends and is eventually reunited with his sister. But trouble comes when the rescue is shutdown by the authorities for having too many dogs. Toby soon finds himself in a bad situation ...

When Toby's life comes to an end, he is reincarnated as a beautiful Golden Retriever. Now the puppy is part of a healthy litter, kept with a breeder. When he sees other puppies, from other litters, being adopted and disappearing into the great beyond outside the yard, he wants to go. He remembers watching his mother from his first life open the door handle, and he works to copy her. It works and he escapes from the breeder and wanders around until he is scooped up by a kindly man who takes him for a ride in his car. Unfortunately, the man stops at a bar and leaves the puppy in his hot car. Once again the puppy is rescued, this time by a woman who breaks the car window just in time before heat stroke kills the dog. She takes the puppy home to her young son, and this is where the bulk of the story is - between "Bailey" the dog and "Boy."

After "Boy," Bailey comes back a few more times - once as a K-9 Search and Rescue German Shepherd and again as a black Lab. His final reincarnation as the Lab brings him full circle with a very satisfying conclusion to the story.

Told from the dog's point of view, A Dog's Purpose is a delightful story that immediately drew me in and kept me reading until the last page was turned. The author has a true gift of capturing the thoughts of a dog and it truly felt as if the dog was sharing his life with me. Toby/Bailey/Ellie/Buddy was a loving dog who knew that his purpose was to do what his human wanted/needed him to do, whether that was save a child from drowning, or go for a car ride to make a boy happy. Like every dog, this dog picked up words - "kennel," "bed," "sleep," etc. and basic concepts such as "Merry Christmas" that to him meant people coming to the house. He would be sitting at the feet of his owner and pick up a word from the humans talking - for example, his name - and get all excited, not knowing what the rest of the conversation was about. The author did include a minimum amount of dialogue from the humans to give readers a hint of what was happening, but even without that assistance, it wasn't hard to follow. Much of what the dog did was pick up on emotions of those people around him - sensing joy, fear, pain - and reacting accordingly. The writing style definitely worked quite well, and I look forward to diving into the sequel, A Dog's Journey.

Quill says: There's a reason Hollywood came calling and made a movie based on this book! If you love dogs, do yourself a favor and read A Dog's Purpose.